While growth in numbers remains modest, the presence of women in Quebec’s construction industry is slowly increasing.

The number of women working on construction sites in Quebec is rising, despite the existence of persistent obstacles. That’s according to a report outlining the first two phases of the Programme d’accès à l’égalité des femmes dans l’industrie de la construction (PAEF) 2015-2024, published by the Commission de la construction du Québec (CCQ). 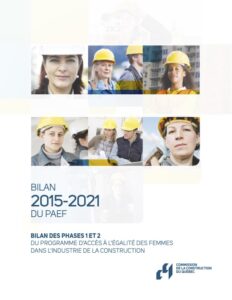 Following deployment of phases 1 and 2 of the PAEF, both the number of women workers practising a trade or occupation in the construction industry and the number of companies hiring at least one woman rose.

In 2021, the target to have a three per cent minimum of women working on construction sites in the province was reached. Women workers numbered 6,234, or 3.27 per cent of the total workforce, which was an increase from 2015 when they represented 1.49 per cent of workers on sites. Today, 15 per cent of companies in the industry employ at least one woman; this figure stood at eight per cent when the program was adopted.

Despite this acceleration in the presence of women in recent years, their proportion in the total workforce and their numbers remain low. The report indicated that persistent obstacles, notably with regard to work climate, impede their progress, and that a higher proportion of women (21 per cent) than men (15 per cent) leave the industry after one year.

And female workers in the province tend to be concentrated in certain trades and occupations, such as painter, resilient flooring layer, and carpenter-joiner, whereas few of the targets per trade or occupation have been reached.

“The report on the first two phases eloquently illustrates the importance of the commitment of all partners to reaching the PAEF objectives,” explained Diane Lemieux, CEO of the Commission de la construction du Québec. “Although there has been a perceptible change of culture, we must continue the work we’ve begun to counter the obstacles that are still present, especially with regard to a healthy and inclusive climate, training, and job retention. These changes will be beneficial not just to women but to the industry as a whole.”

In light of the report’s observations, the CCQ is continuing the work undertaken to identify, with key organizations, structural actions will make it possible to support deployment of phase 3 of the PAEF.

Programme d’accès à l’égalité des femmes dans l’industrie de la construction (PAEF) 2015-2024 aims to increase the number and proportion of women practising a trade or occupation in the construction industry. It has 11 objectives and 40 measures, 22 of which are the responsibility of the CCQ. They are articulated around three orientations: supporting women’s careers, creating a favourable environment, and ensuring shared responsibility.