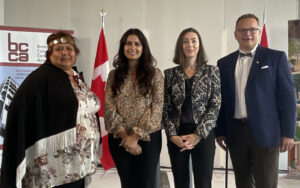 The BC Construction Association (BCCA) has received over $21 million in funding from the Canadian government’s Apprenticeship Service to enable small and medium sized employers in that province’s construction industry to hire and register first-year apprentices.

An employer with fewer than 500 employees in the B.C. construction industry can receive financial incentives for hiring new employees or registering existing ones as first-year apprentices in Red Seal trades.

Participating employers will receive $5,000 for hiring or registering any worker. To facilitate workforce diversity, an additional $5,000 will be received if the worker self-reports as a woman, new Canadian, LGBTQ+, Indigenous, a person with a disability, or a visible minority. Employers can receive payments for up to two first-year apprenticeship positions per year during the two years of the drive, for a maximum of $40,000 per employer.

“B.C.’s construction industry is in a vice grip right now, and it’s tightening,” says Chris Atchison, BCCA president. “Employers are dealing with rising costs, material shortages, increased taxes, mandatory sick pay, labour shortages and late payments. It can be costly to hire and train new apprentices, and especially in this climate, $40,000 can go a good distance to alleviating some of that cost burden.”

Employers can spend the financial incentives at their discretion. For example: hiring bonuses, gear and work apparel, childcare costs, offsetting business taxes, offsetting costs of mandatory sick leave, training and mentoring, raises for field or office staff, safety equipment, or new technology. As part of the service to employers, BCCA will provide culture training via its Builders Code program, and mentorship support through its new Building Builders initiative.

In a release outlining the program, BCCA explained that B.C.’s construction industry is approximately 95 per cent male and continues to face a skilled workforce shortage during a time of high demand for construction services. The association also explains that roughly 90 per cent of employers in the sector have fewer than 20 workers.

“We need more skilled trades workers in British Columbia, and across Canada,” said Carla Qualtrough, Minister of Employment, Workforce Development and Disability Inclusion. “That’s why we’re working with employers to create tens of thousands of new apprenticeships. It’s why we’re doubling incentives for employers who hire women, persons with disabilities, and other traditionally marginalized groups – to make sure that everyone who wants to pursue a skilled trade, has the chance to.”

In addition to the financial incentives, the BCCA will conduct a major promotional campaign to attract new talent to the industry.

“We know that construction employers are already doing their best to find and hire workers,” stated Atchison. “So, in addition to the financial incentives, we’re going to mount a compelling acquisition campaign to bring new talent to employers who list their jobs with us. We’ll be working with a digital recruitment agency, as well as a marketing and communications agency. We’re pulling out all the stops.”