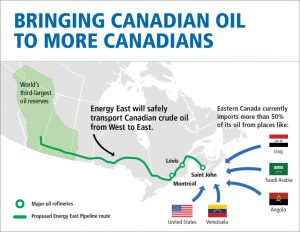 Edmonton – TransCanada’s decision to cancel the Energy East pipeline project is a stark reminder of a regulatory system that no longer serves the national interests of Canadians, according to the Progressive Contractors Association of Canada (PCA).

“This is yet another example of Canada’s failure to approve major infrastructure projects even though the benefits to Canadians, communities, the economy and our skilled workforce are undeniable,” said Paul de Jong, President of the Progressive Contractors Association of Canada (PCA). “Canadians have just lost out on thousands of jobs from coast to coast, billions in GDP and tax revenues, and there’s no good reason for it.”

The project would have served as a means of boosting Canada’s oil and gas exports and easing reliance on foreign oil supplies.

“Energy East was a prime example of a milestone project that benefited us all,” said de Jong. “Now it’s symbolic of a system that’s breaking down our national resolve to build those major infrastructure projects that Canada’s economy, prosperity and competitiveness depend on.”

Last year PCA launched the Let’s Build It Campaign to help get some of Canada’s largest and most important energy and infrastructure projects built.

For more about “Let’s build it” visit: www.pcac.ca/action