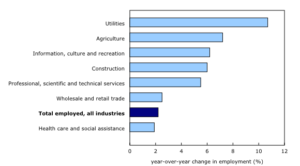 Employment opportunities in the construction industry continued to grow, however. The sector saw 10 per cent growth in the number of workers employed, year-over year, as of September. Roughly 109,000 more people found work in the sector compared to the same month a year earlier. Also on the rise were wages, posting an average of $33.79 per hour, which was a 7.5 per cent increase over the same month a year ago.

In September, there were just under one million people aged 55 to 64 who cited retirement as their main activity. Over the past 20 years, total labour force participation has fallen slowly but steadily from more than 67 per cent in September 2002 to less than 65 per cent in September 2022. This decline has been due in large part to population aging, as ongoing retirements among the baby boom cohort puts downward pressure on labour supply in Canada.