EllisDon to take on phase two of $1.35B Vancouver area hospital redevelopment 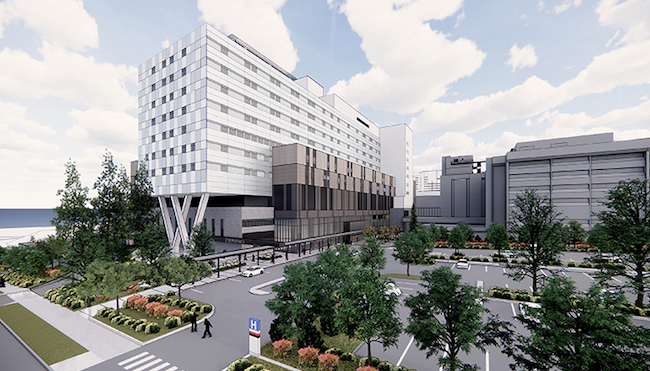 A rendering of the redeveloped hospital, the oldest in the province still operating. PHOTO: Fraser Health

EllisDon has won the contract for the second phase of redevelopment on the Royal Columbian Hospital in New Westminster, B.C.

Fraser Health, which oversees the hospital on the east end of Metro Vancouver, announced the design-build agreement Jan. 11. and said early work is already underway.

The Mississauga-based contractor will be responsible for building a new acute care tower with more patient beds, a larger emergency department, four operating rooms and space for number of other medical services. The phase also includes construction of a two-level parkade, a new main entrance to the hospital and a rooftop helipad.

Excavation for the new tower is expected to start shortly and work will run through 2025.

Construction is part of a three-phase redevelopment project at B.C.’s oldest operating hospital and follows the completion of the site’s new Mental Health and Substance Use Wellness Centre, which opened last summer. The total cost for the modernization is estimated at $1.35 billion.

Along with the contract for phase two construction, Fraser Health said it has also awarded EllisDon a construction management contract for the upcoming final phase of work. Phase three is scheduled to start in 2023 and focus mainly on upgrades and expansions to existing facilities.