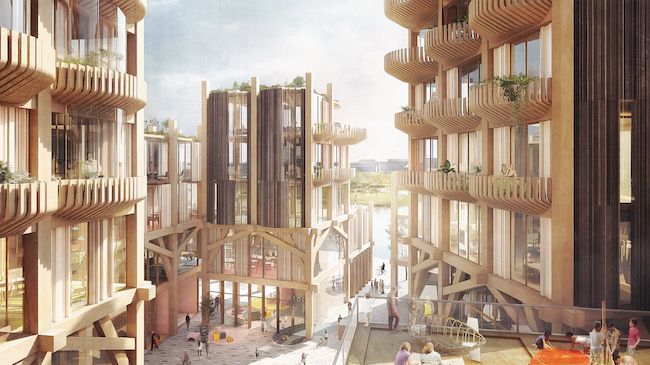 A rendering of part of the lakeside development project. PHOTO: Picture Plane for Heatherwick Studio

TORONTO — Plans for a high tech Toronto community led by an Alphabet Inc.-backed entity should be scrapped, say politicians and prominent Canadian business and technology leaders.

In the wake of a leaked report last week that revealed Sidewalk Labs’ interest in laying claim to developer fees and taxes usually routed to the city in exchange for funding Toronto’s waterfront transit, longtime critics of the project said it is time to revisit whether the project should continue to move forward.

The project — a partnership with Waterfront Toronto that hopes to bring affordable housing, heated sidewalks, raincoats for buildings and autonomous vehicle infrastructure to 12 acres of the city’s waterfront known as Quayside — has been mired in controversy since Sidewalk won a contract in 2017.

In addition to funding a light rail transit line, the latest round of ideas floated by Sidewalk includes plans to provide infrastructure to a waterfront area bigger than, but surrounding, Quayside.

City councillor Gord Perks, who represents the west-end Parkdale-High Park neighbourhood, has long fretted about Sidewalk’s data privacy policies, lack of transparency and desires around solid waste and transportation, but considered Thursday’s revelations around it wanting to fund a light rail transit line a “confirmation of our worst fears.”

“The three governments who are involved should halt the process with Google and go to the public and say we have an area of land as big as the downtown, what would you like to do?” he told The Canadian Press.

“Based on that we should figure out what pieces need to be developed publicly and which pieces involve the private sector.”

Perks was adamant that he would not support Sidewalk’s light rail transit plan and said “rather than wasting time chasing after a pot of gold at the end of that rainbow, we should get on and do what we know does work: build it with public dollars.”

Despite the criticisms, Sidewalk spokesperson Keerthana Rang said in an email to The Canadian Press that the company is still “excited” about the project, which she said “will be up to residents, Waterfront Toronto and all three levels of government to decide if it should go forward.”

“Unfortunately, there are some who have never been open to exploring what a partnership between Waterfront Toronto and Sidewalk Labs might make possible on the waterfront, and so this is not particularly surprising,” she said.

Waterfront Toronto spokesperson Andrew Tumilty wrote in an email that his organization “values all points of views from the community and remains committed to a full evaluation of Sidewalk Labs’ proposal when it is received.”

An Ontario government source, who spoke on the condition of anonymity, told The Canadian Press previously that the scope of Sidewalk’s ideas was “concerning” and said “As it is written, there is no way our government would sign off on that plan.”

“It should absolutely be shut down, but the reason for that isn’t what was in the plan. It’s the process,” she said. “There has been inadequate transparency from the very beginning.”

Despite Sidewalk hosting several meetings to collect public feedback, Wylie has long worried about the company being secretive with its plans — its transit ideas were only shared after slide decks containing the concepts were leaked to media — and is concerned about the breadth of topics Sidewalk has been lobbying all three levels of government on.

The Canadian Press found at least 32 lobbyist registration records for the company at the City of Toronto, where Sidewalk staff as prominent as chief executive officer Dan Doctoroff have registered to lobby on everything from transportation to public health.

Records show the company has registered at least 40 people to lobby the province and eight, including Doctoroff, to lobby the federal government on similar matters. Federal records show Sidewalk’s lobbyists have aimed their efforts at a broad swath of departments including the prime minister’s office and the treasury board.

“Nobody asked for an omnibus proposal of putting a vendor in a place where they could influence all kinds of different things in a neighbourhood,” said Wylie. “There is no reason for anyone to have any trust in this project.”

Developer Julie Di Lorenzo, who resigned from the Waterfront Toronto board over the project, also cast aspersions on the integrity of the project and its future.

“They are trying again to act like a master developer of hundreds of acres of lands that belong to The City of Toronto and its residents. Its outrageous,” she told The Canadian Press.

“Those monies belong to our democratically elected governments and property owners. Every time Sidewalk shows us a map, the land area they ‘need’ gets bigger.”