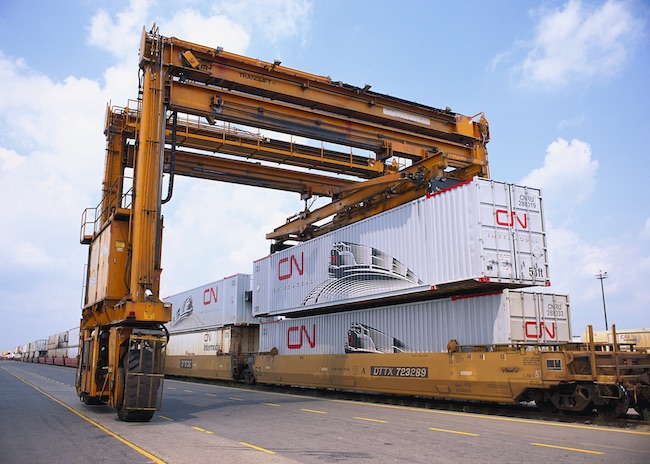 An existing CN intermodal hub in Brampton. The new facility in Milton is needed to meet growing requirements in the Toronto area, the company says. PHOTO: CN

The federal government has green-lit a major rail infrastructure project west of Toronto in spite of vocal opposition from the local community.

The Impact Assessment Agency of Canada last week, approved the Canadian National Railway Co.’s Milton Logistics Hub after an environmental assessment process lasting roughly five years. The federal nod on the $250 million intermodal project subjects the proposed facility to 325 conditions designed to govern air quality, groundwater and wildlife. Among many other stipulations, CN will need to limit the number of trucks entering the site to 800 per day.

Jonathan Wilkinson, the minister of Environment and Climate Change Canada, said the approval shows Ottawa’s commitment to both economic and environmental issues.

“Today’s decision to approve the Milton Logistics Hub Project, which is subject to a wide range of conditions that the proponent must comply with to protect human health and the environment, demonstrates that the federal regulatory process meets the economic and environmental objectives of Canadians at the same time,” he said in a release.

In a statement, CN said it is pleased with the federal government’s approval of the project, describing the facility as a “much-needed addition to the Canadian supply chain to meet the growing demand goods into the Greater Toronto and Hamilton area.”

“We would like to thank all three levels of government, Indigenous communities and their leaders, customers, members of the community, business groups, and stakeholders who took the time to participate in the review process and provide comments on this project,” the company said in a statement. “CN is committed to continued engagement with communities and interested parties as we move forward with the project.”

The new intermodal facility will be built on company-owned land at roughly Tremaine and Britannia roads in Milton and be used mainly to transfer shipping containers between trucks and trains. Several pieces of support infrastructure are also included, such as a truck entrance and queuing area; a realignment and extension of the railway’s mainline; and a stormwater management system.

Throughout much of the review process, the project has seen determined opposition from the local community, tied mainly to concerns over traffic congestion and pollution.

Halton Region, which includes Milton, Oakville, Burlington and Halton Hills, said it was “extremely disappointed” with the federal approval.

“It is unconscionable that the federal government would approve this project despite findings from its own Federal Review Panel that the project will cause significant adverse effects on human and environmental health,” Halton Regional Chair, Gary Carr, said in a release. “There has never been a decision like this before.”

The federal approval acknowledges adverse environmental effects, but adds the effects “are justified in the circumstances.”

Following the federal decision Jan. 21, Halton Region said it would review the decision and determine the best path forward.

CN has not commented on its next steps for the project. The IAAC noted several approvals and permits are still required, pointing specifically to authorization from the Canadian Transportation Agency.