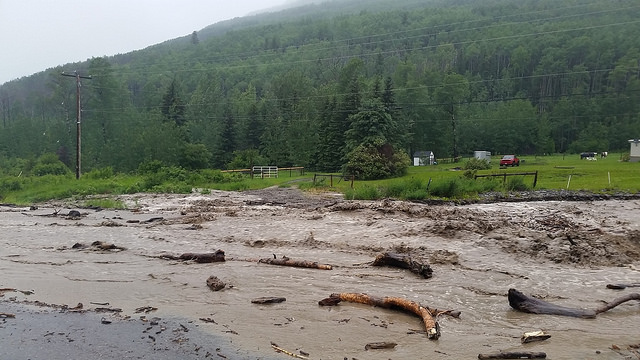 The area sustained significant flood damage in the spring of 2016. PHOTO: Province of British Columbia/Flickr

CHETWYND, B.C.—Construction crews have started work on five bridge projects in an area of northeast B.C. that sustained significant flood damage in the spring of 2016.

The handful of projects along Highway 97 west of Chetwynd, B.C. are worth a combined $26.8 million. Work on all five projects consists of replacing existing culverts with two-lane bridges capable of withstanding the 200-year flood level. New highway approaches on both sides of each bridge are also included.

Cewe Infrastructure Ltd. secured the contract for the highest-value individual project. The company will build a bridge over Commotion Creek worth $7.3 million.

Bridges over Stone Creek, Tippy Corner Creek and Willow Flats, meanwhile, are being overseen by Surespan Construction Ltd. of North Vancouver. The three projects are worth a combined $12.4 million.

Work on all five of the projects is expected to reach substantial completion by this fall.