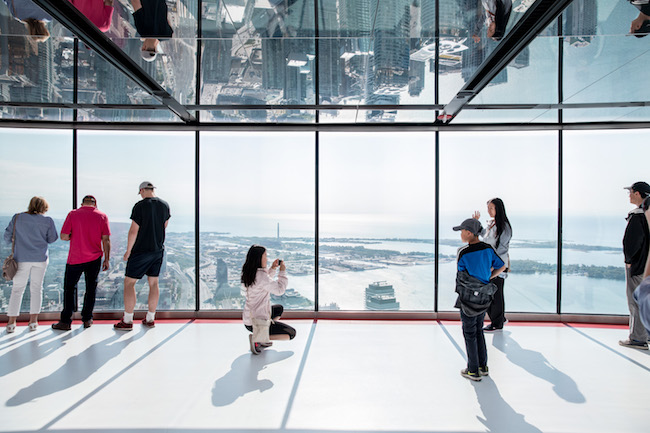 The renovation is the tower’s most significant revamp since it first opened to the public. PHOTO: Canada Lands Company

TORONTO—Crews have completed work on the largest makeover of Canada’s National Tower since the Toronto landmark first opened to the public in 1976.

The $16 million project was largely interior and renovation work that revamped the tower’s 1,300 square metre (14,000 sq. ft.) main observation level. It added a new glass floor overlooking the original and floor-to-ceiling glass windows for enhanced views from the 553-metre (1,815-ft.) structure sitting atop the Toronto skyline.

The CN Tower and Toronto waterfront in 1975

The renovation project coincides with the tower’s 42nd birthday.

Originally built by Canadian National Railways, the tower was later transferred to the Canada Lands Company, a federal crown corporation.

It took a construction crew of about 1,500 workers 40 months, thousands of cubic metres of concrete and a number of novel construction techniques to erect the tower between 1973 and 1975.

A heavy-lift Sikorsky helicopter nicknamed Olga capped off the tower, delivering the 44 separate pieces of the antenna that crews then bolted into place. Construction wrapped up in April 1975 and the tower opened to the public just over a year later.

The CN Tower was the tallest freestanding structure in the world for more than 30 years before it was overtaken in 2007 by Dubai’s mammoth skyscraper, the Burj Khalifa.

Related
Tallest tower in Canada outside Toronto rises in Edmonton