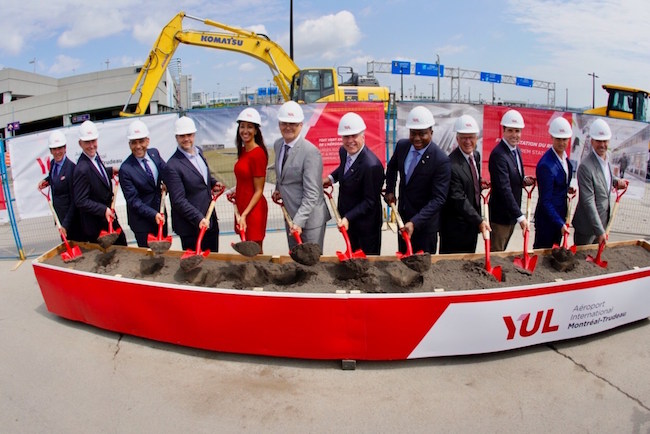 Officials from Aéroports de Montréal (ADM), sunk their ceremonial shovels in the ground late last week to mark the start of construction on Montréal-Trudeau International Airport’s light rail station. The airport authority is footing the $250 million bill for the station as part of a much larger airport expansion effort.

The airport is the terminus for one arm of Montreal’s new automated light rail network. Work on the $6.3 billion REM is ramping up across the city, with work expected to be complete by 2023.

Crews at Montreal-Trudeau will also be targeting 2023 to complete the new station, which will ferry travellers to the city’s downtown in about 20 minutes.

“For over 25 years, we have been waiting for our international airport to be connected to downtown Montréal by an efficient rail link,” Philippe Rainville, president and CEO of AMD, said in a release. “This structuring project is the first step in an ambitious redevelopment of our access infrastructures that will enable us not only to respond adequately to the growth of passenger traffic at YUL, but also to improve the inter-modality of the airport site to make it more accessible for the benefit of travellers, as well as to put an end road congestion challenges.”

Excavation for the new underground station will be among the first steps. Crews will need to dig to a depth of about 35 metres (115 feet) beneath an airport parking complex, which is being rebuilt as part of the airport redevelopment. Meanwhile, a tunnel boring machine will begin digging at the adjacent Technoparc REM station, cutting the tunnel to the airport.

A consortium made up of Pomerleau, SNC-Lavalin and Kiewit are heading the airport’s overall redevelopment project, which is expected to cost approximately $2.5 billion.