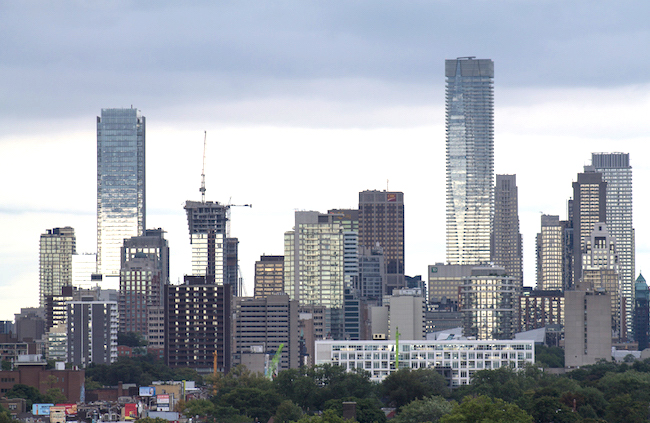 TORONTO—The skyline of Canada’s most populous city has changed dramatically over the past decade. With tower cranes spread along Toronto’s waterfront, across its ever-expanding core and north along Yonge Street, it’s poised to keep evolving.

According to the the latest iteration of consulting firm Rider Levett Bucknall’s Crane Index, the city leads others in North America on the key development metric.

Midway through 2018, RLB counted 97 cranes at work over Toronto, putting it well ahead of second-place Seattle, which had 65.

Up from a tally of 88 at the beginning of the year, the vast majority (86 per cent) of Toronto’s cranes are being used to build residential towers. The report forecasts little change to the development boom, citing 400 new high-rise projects currently at the proposal stage. The seemingly inexhaustible demand for new housing, buoyed by high real estate costs, is expected to keep construction crews busy for the foreseeable future.

Chicago trails Seattle in third place with 40 cranes. Other notable metro centres Los Angeles and New York have 36 and 20 respectively, though it’s worth noting the RLB report is not an exhaustive study of every North American city.

Calgary, meanwhile, is the only other Canadian locale included in the study. The Alberta city currently has 26 cranes, up from 22 in January.