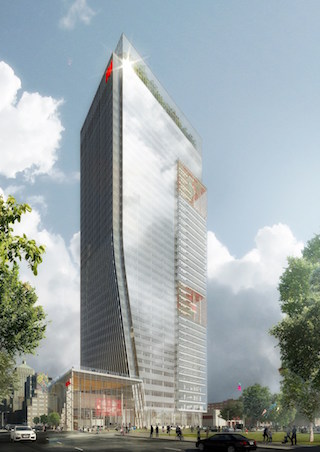 MONTREAL—Construction is underway on the largest office tower to go up in Montreal in a quarter century.

National Bank, which announced plans to build the new 40-storey tower earlier this year, held an official groundbreaking at the site on Saint-Jacques Street West Nov. 7.

The Montreal-based bank plans to invest more than $500 million in the building. Among other features, it says it will include a conference centre, two-storey cafeteria, large entrance hall and an outdoor garden on the 40th floor. The tower will also house 80 charging stations for electric cars and lockups for 400 bicycles.

Montreal architect firm Menkès Shooner Dagenais LeTourneux Architectes is in charge of the design and is targeting a LEED v4 Gold certification.

While the new tower will top out about 15 metres (49 feet) short of the city’s tallest building—1000 de La Gauchetière stands 51 storeys, or 205 metres (673 feet)—the new National Bank head office will become the tallest building erected in Montreal since the early 1990s.

With a late 2022 completion date, construction of the building is scheduled to take four years.