The number of people working in construction rose by 1.6 per cent in October, a gain of 25,000 jobs. 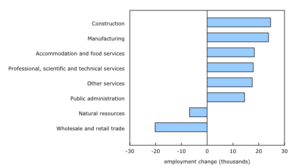 Canada had 25,000 more construction workers in October than September, says the latest Labour Force Survey from Statistics Canada. The 1.6 per cent rise in the number of people working in construction was paced by increases in five provinces, including Quebec, which gained 17,000 in the segment, and British Columbia, which saw its ranks swell by 6,000. Across all sectors, employment rose by 108,000, or slightly more than a half-per-cent for the month, recouping losses observed from May to September.

The number of private-sector employees rose for the first time since March 2022, though employment figures were little changed among employees in the public sector and among self-employed workers.

Both men and women in the core working ages of 25 to 54 posted increases in October, although those older and younger than that demographic did not see any significant growth or declines. Employment rose in six provinces, with gains concentrated in Ontario and Quebec.

Year-over-year growth in the average hourly wages of employees remained above five per cent for a fifth consecutive month in October, rising 5.6 per cent, or an additional $1.68 compared to a year earlier, bringing the average to $31.94.

In October, nearly two-thirds of employees with wages above $40 per hour had received a raise in the previous year, compared with half of those with wages of $20 or less per hour.

After declining in September, Statistics Canada says the unemployment rate held steady at 5.2 per cent in October, 0.3 percentage points above the record low of 4.9 per cent observed in June and July. The adjusted unemployment rate, which includes people who wanted a job but did not look for one, was virtually unchanged at 7.1 per cent.

Labour force participation rose 0.2 percentage points to 64.9 per cent in October, but fell 0.5 percentage points short of the recent high of 65.4 per cent, which was reached in February and March 2022. Increases in the labour force were relatively widespread in October, with the largest gains occurring among young women and core-aged men, with gains of 30,000 and 25,000, respectively. Overall, labour force growth was almost entirely accounted for by the rise in the number of people who were employed. The total number of unemployed people was little changed.