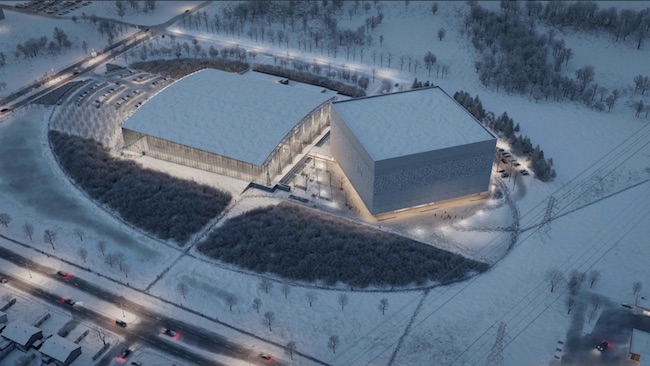 A rendering of the newly-designed cube-like building located beside the current Preservation Centre, which opened in 1997. PHOTO: Library and Archives Canada

GATINEAU, Que.—Construction of a unique facility designed to house part of the federal government’s vast trove of Canadian heritage documents, photos, artwork and films is poised to get underway later this year.

Library and Archives Canada (LAC) and Plenary Properties Gatineau, the P3 team responsible for the project, unveiled the design for the new preservation facility June 18. The cube-like structure will be located next to the existing Gatineau, Que. Preservation Centre, which opened its doors in 1997.

“This new flagship building, which will accompany the award-winning and world-class Preservation Centre in Gatineau, is yet another testament to Library and Archives Canada being able to set itself apart in opting for a green and sustainable infrastructure,” Guy Berthiaume, Librarian and Archivist of Canada, said in a release. “Once built, this new state-of-the-art facility will ensure the preservation and accessibility of our rich collection of treasures for centuries and for generations to come.”

The design team is aiming high with the new building, targeting a net-zero carbon designation that requires minimal carbon emissions from energy use, little embedded carbon and entirely carbon-free fuel sources. The facility will also incorporate an automated storage and retrieval system, making it the largest preservation building in the world to do so.

Construction will start later this year and is scheduled to wrap up by 2022.