Employment in the sector rises more than two per cent on the month; almost six per cent over the past 12 months. 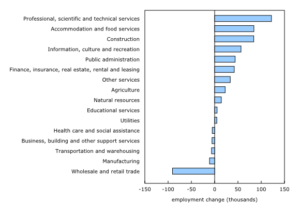 Following a decrease in employment in November, the number of people working in Canada’s construction sector rose by 35,000 in December. The 2.3 per cent increase was led by significant gains in Ontario and Alberta.

On a year-over-year basis, employment in construction was up by 84,000 in December, a jump of almost six per cent.

Overall, Canadian employment figures rose by a half-per cent, or 104,000 positions, for the month. For the month, Canada’s unemployment rate declined 0.1 percentage points to five per cent, just above the record low of 4.9 per cent that was observed in June and July of 2022.

Employment growth was led by an increase among youth aged 15 to 24, which recouped cumulative losses observed for this group from July to September. General gains were posted in Ontario, Alberta, British Columbia, Manitoba, Newfoundland and Labrador, and Saskatchewan in December. There was little change in the other provinces.

Year-over-year growth in the average hourly wages of employees remained above five per cent for a seventh consecutive month in December, rising 1.57 to $32.06 compared with December 2021. Total hours worked were little changed on a monthly basis in December, and up roughly one-and-a-half per cent compared with 12 months earlier.