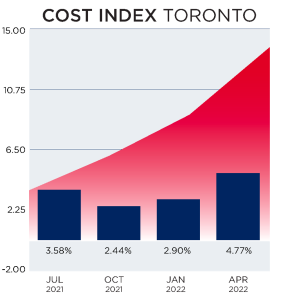 It’s getting considerably more expensive to build things in Canada, says Rider Levett Bucknall (RLB) in its latest Quarterly Construction Cost Report (QCR). The Second Quarter report from the global construction cost consultant presents a snapshot of construction costs and hypothetical changes in bid pricing in 16 major cities in North America, including two Canadian cities, Calgary and Toronto, which it says are experiencing year-over-year cost increases of more than 10 and 14 per cent, respectively.

Despite the ongoing challenges presented by rising costs, labour scarcity and increases in materials costs and fears of projects being delayed, the report cited several infrastructure-related government spending initiatives that should see projects moving forward in both of those cities.

For example, RLB highlighted the $789.4 million that is in this year’s Capital Plan for roads and bridges in Alberta, along with a $1.4 billion provincial construction initiative that includes more than 300 projects over the next two years. And Calgary’s Green Line LRT continues to move ahead.

In Toronto, the resale market has slowed, but the residential pre-construction market remains active. While it may not reach the heights of the 2021 figures, it is still expected to be a solid year. And the provincial government also announced plans to increase spending on public infrastructure by 11 per cent. Two major undertakings to benefit from that additional spend will be expansion of public transportation and construction of new highways.