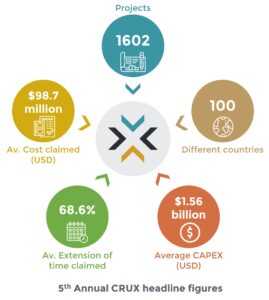 Changes to a project’s scope and incorrect or incomplete designs result in higher costs and longer timeframes. Those were some of the key findings in the fifth annual CRUX Insight Report, published by risk mitigation and dispute resolution consultancy firm HKA.

The firm examined more than 1,600 projects across 100 countries with a cumulative value of more than US$2 trillion, to discover that globally, costs claimed in disputes averaged more than a third of a project’s capital expenditure (35.1 per cent of CAPEX) and amounted to US$98.7 million per project. Moreover, projects faced even heavier losses in time, with time extensions averaging 16.5 months, or 68.6 per cent, of original planned project durations.

Almost 100 Canadian projects were included in the analysis, and while these projects fared better than the international averages, claims still bumped project costs by an average of 22 per cent, or US$53 million, and extended timeframes by 9.5 months.

This year’s report, which distils the analysis of projects HKA have provided services on up to the end of July 2022, highlights the damaging influence of factors such as dysfunctional design processes, skills shortages and supply chain disruption on project performance. 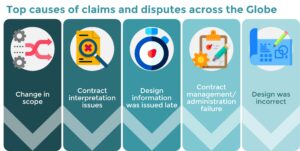 “This new CRUX Insight report reveals the impacts in additional costs and time claimed for the completion of major capital projects, as well as the underlying causes,” stated Renny Borhan, CEO of HKA. “Based on first-hand investigations by our expert consultants around the world, it quantifies the huge toll on the global economy, our industry and project stakeholders.”