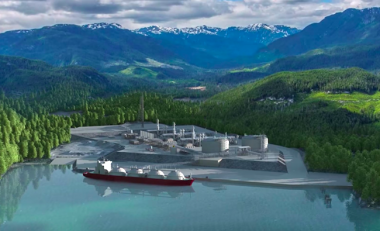 An early rendering of the proposed LNG facility on the B.C. coast. PHOTO: Chevron Canada/YouTube

CALGARY—Chevron Canada has applied to the National Energy Board to nearly double the potential size of the Kitimat LNG facility it hopes to build with Australian partner Woodside Energy.

In a filing dated April 1 and posted on the NEB website, the Canadian branch of California-based giant Chevron Corp. says it is applying for a 40-year licence to export up to 28.23 billion cubic metres of natural gas per year, with commissioning of the facility anticipated by 2029.

That’s the equivalent of about 18 million tonnes of liquefied natural gas and is nearly double the 10-million-tonne, 20-year licence it was previously granted, which is set to expire at the end of this year.

In a statement, the company says the increase in scope comes after a review that focused on improving the project’s “cost of supply competitiveness” relative to other LNG projects around the world.

“Since 2015, Chevron and Woodside have made significant progress in enhancing Kitimat LNG competitiveness, reducing LNG unit costs by over 45 per cent and incorporating a new all-electric LNG plant design,” said Chevron spokesman Leif Sollid in an email.

The partners have not made a final investment decision, nor have they set a date to do so, but the expanded project is seen as another hopeful sign for B.C.’s nascent LNG industry.

Last fall, the Shell Canada-led LNG Canada consortium announced it would proceed with its $40-billion, 14-million-tonne-per-year project, also to be built near Kitimat.

“Kitimat LNG has the opportunity to take advantage and build on this foundation.”

He said the developers are assessing B.C.’s recent introduction of legislation to encourage more LNG development through a natural gas tax credit and repealing the Liquefied Natural Gas Income Tax Act, which it said created barriers for investment.

The new plan for Kitimat LNG envisions initially building two six-million-tonne production “trains” with the option to add a third later, as opposed to the original two-train proposal.