Celebrating the trades in Alberta

Alberta declares Monday, September 26 as Apprenticeship Day to recognize the contributions of apprentices to the province. 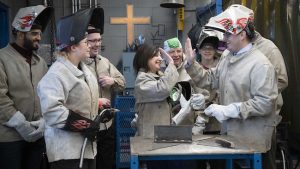 Noting that it has 12 per cent of Canada’s labour force and 14 per cent of the country’s apprentices, the Alberta government has created Apprenticeship Day under the new Special Days Act. The day will be recognized annually in the province on the fourth Monday each September.

“Tradespeople are the backbone of Alberta’s economy. It is essential we encourage young people to enter the trades and promote the tremendous value of apprenticeship education,” stated Demetrios Nicolaides, the province’s minister of Advanced Education. “Our government remains committed to expanding apprenticeship education and promoting its parity of esteem with traditional education.”

“We are pleased with the announcement of Apprenticeship Day, an annual celebration in recognition of the important contributions apprentices make to our communities, our economy and our province,” added David Ross, president and CEO of SAIT

Over the past year, the province’s government pledged $30 million over three years to enhance apprenticeship programs and opportunities; proclaimed the Skills Trades and Apprenticeship Education Act; created the Alberta Board of Skilled Trades; and formed a Career Education Task Force to review career education programming and provide strategic advice and recommendations that will help strengthen student learning pathways.

“We’re proud to play a role in supporting construction apprenticeship education in Alberta. We know first-hand how rewarding a career in Alberta’s construction industry can be and have witnessed the life-changing opportunity these career paths bring,” stated Carol Moen, president and CEO of Women Building Futures. “We applaud the Government of Alberta in paying special tribute to apprenticeship education today and for highlighting the contributions apprentices bring to our economy.”