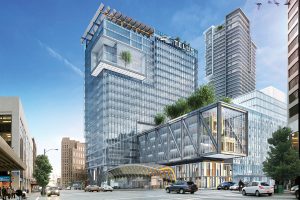 Ottawa – Green building in Canada has reached a significant milestone, as the Canada Green Building Council (CaGBC) announced April 21st. Canadian LEED certified projects have now led to a cumulative reduction of over one million tonnes of CO2e in greenhouse gas emissions – the equivalent of taking 238,377 cars off the road for a year.

This announcement comes as Canadian governments at all three levels are accelerating efforts to formulate climate change strategies. As the voice for green building in Canada, CaGBC supports sustainable infrastructure as one of the most practical and effective solutions to our changing climate. This is demonstrated by the GHG reduction and a number of other big impacts (calculated cumulatively between 2005 and the end of 2015) that show how green buildings have benefitted Canadians:

In addition to these key impacts, the CaGBC has also announced that in the first quarter of 2016 it certified the 1,000th LEED Gold project in Canada. LEED Gold, the second most rigorous level of certification, now makes up 38 per cent of all LEED certified projects in Canada – the highest percentage of all levels. This is evidence of the industry’s enhanced capability to achieve higher levels of building performance.

The market penetration of LEED certified buildings in Canada has been growing over the last decade, from 0.8 per cent across all asset classes for the period of 2004-2009, to 10.7 per cent for all new construction floor space (2009 to 2014). The growth of LEED is projected to generate approximately $59.1 billion in direct dollar gross output, $25.44 billion in GDP, and create almost 330,000 direct jobs over the lifetime of the buildings.

“The CaGBC, its members and stakeholders, have been working for the past 14 years to mitigate the effects of climate change through green buildings and sustainable communities,” says Thomas Mueller, president and CEO of the Canada Green Building Council. “These two milestones are a tribute to the efforts of the Canadian green building industry who have been at the forefront of the push toward a low-carbon economy. Owners and developers, practitioners and builders didn’t wait to take action but have led the charge toward maximizing the environmental and health benefits of building projects across the country. We are encouraged to see such strong results and look forward to continuing our work with the public and private sectors to ensure this momentum continues.”

Among the most notable projects that earned LEED certification in Q1 of 2016:

TELUS Garden Office Tower in Vancouver, BC, which certified LEED Platinum. This one million square foot development in the heart of downtown Vancouver includes a 47-storey residential tower that is currently under construction and will also be targeting LEED. Sustainability features that led to its LEED Platinum certification include: a district energy system that will reduce demand from conventional energy sources by up to 80 per cent and reduce carbon dioxide emissions by more than one million kilograms a year (according to TELUS); one of Vancouver’s largest solar panel collections on the office’s rooftop; and garden terraces on six levels planted with a community food garden, including hundreds of plant species.

The Quispamsis Q-Plex Sports and Wellness Centre in Quispamsis, NB, which certified LEED Gold. This 7,000 square metre facility is located near nature trails and surrounded by sports fields in the heart of a growing community within the Kennebecasis Valley. Sustainable features included the use of a geothermal heat recovery system which heats the arena and pool, a storm water management pond, and the ongoing measurement and verification of energy performance to ensure maximum building efficiency. This project’s certification represents the town’s commitment to minimizing their environmental impact, both of the new facility and its subsequent operations.

The Pine Grove Correctional Centre in Prince Albert, SK, which certified LEED Gold. Saskatchewan Government Services which owns the building has a commitment to sustainable building design, with a mandated minimum of LEED Silver for all government buildings in the province. As traditional correctional facility design does not lend itself well to sustainability, the design team had to be innovative in their approach. Sustainable features included: specifying materials that were recycled or locally extracted, 100% of the wood is FSC Certified, and in-wall radiant heating in each cell. Additionally, with a high rainfall rate in Prince Albert, the stormwater collected and used for greywater in flush fixtures and on-site irrigation.

A searchable LEED project database with further detail on all LEED certified projects, including project scorecards and photos, can be viewed on the CaGBC LEED Project Profiles webpage.