Canada's housing supply shortage has led to a loss of affordability, and a need of more housing. 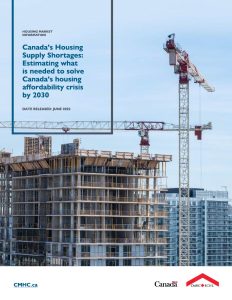 According to a recent report from Canada Mortgage and Housing Corporation (CMHC), housing supply has not responded to demand over the past 20 years in Canada, especially in some of the country’s large urban areas. This, says CMHC, has resulted in the loss of affordability.

The report, Canada’s Housing Supply Shortages: Estimating what is needed to solve Canada’s housing affordability crisis by 2030, takes initial steps to estimate how much additional housing supply is required to restore affordability by 2030, that date upon which CMHC has set as its aspiration for everyone in Canada to have a home they can afford and that meets their needs.

The report looks at the housing supply gap relative to the state of housing affordability for the entire housing system, with particular focus on the four largest provinces: Ontario, Quebec, British Columbia and Alberta, while providing results for all 10 provinces.

CMHC projects the housing stock to increase by 2.3 million units between 2021 and 2030 if current rates of new construction continue, reaching close to 19 million housing units by 2030. According to the report, Canada would need an additional 3.5 million units to restore affordability. That means that the housing stock would need to climb to over 22 million housing units by 2030 to achieve affordability for everyone living in Canada.

Of note is the suggestion that not all new housing units need be new construction. The report explains some alternative approaches to housing supply as well, such as increased co-living arrangements and redeveloping existing residential, commercial and industrial properties, fore example.

“The scale of the challenge identified in this report is more important than the exact number of housing units required,” advised Aled ab Iorwerth, deputy chief economist with CMHC. “Canada’s approach to housing supply needs to be rethought and done differently. There must be a drastic transformation of the housing sector, including government policies and processes, and an ‘all-hands-on-deck’ approach to increasing the supply of housing to meet demand.”