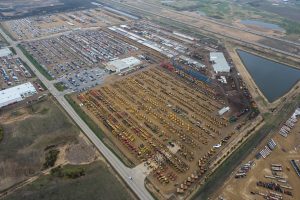 EDMONTON – Selling more than 10,000 equipment items and trucks in five days is a massive undertaking, and last week Ritchie Bros.’ Edmonton team showed it was up for the challenge.

From April 26 to 30, 2016, Ritchie Bros. sold 10,200+ equipment items and trucks for CA$240+ million (US$191+ million) at its 200-acre Edmonton, AB auction site, making it the company’s largest Canadian auction ever and the second-largest auction in company history. The five-day event attracted 16,700+ bidders from 55 countries—a new company record, surpassing the previous record by 19 per cent.

“We would like to thank all the consignors who put their trust in us to sell their equipment last week,” said Brian Glenn, senior vice-president, Ritchie Bros. “Our ability to attract more than 16,700 bidders from every corner of the world helped us achieve solid results throughout all five days of the auction. In particular, we saw strong pricing on motor scrapers, crawler tractors, wheel loaders, highway transport and gravel hauling equipment. Of particular note, approximately 46 percent of the equipment was purchased by Alberta buyers, showcasing the strength and size of this market even when there are economic challenges.”

1,125+ companies sold equipment in the auction, including Newcom Earthmovers Ltd. The Brooks, AB-based earthworks construction contractor sold 400+ items in the Edmonton auction as part of a complete dispersal.

“Ritchie Bros. is a one-stop shop—they know the market and they have resources no one can touch,” said Harold Ward, president and owner of Newcom Earthmovers. “We’ve been buying and selling here since we started the company 12 years ago. With the changing landscape here in Alberta we thought it would be a good time for us to sell and we’re happy with the result.”

“We continue to invest in both our live and online experience, welcoming our customers and offering them the best of both worlds,” said Trent Vandenberghe, vice-president, Ritchie Bros. “The onsite experience in an auction of this size is particularly special. It’s hard to understand the scope unless you see it in person.”

One highlight of the auction was the charity auction of two classic cars donated by Edmonton couple Reno and Jane Trentini. The cars sold for a combined CA$182,500 with all proceeds donated to two charitable organizations: the MS Society and the Edmonton Community Foundation.