Building permits on the rise in May

Commercial and institutional intentions increase on strength in British Columbia. 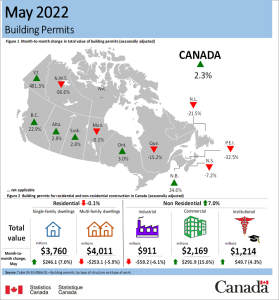 According to the latest figures from Statistics Canada, strength in the non-residential sector paced the total value of building permits in Canada to a 2.3 per cent gain in May, reaching $12.1 billion. Looking by sector, non-residential intentions increased seven per cent to $4.3 billion, while residential permit values were off marginally, dropping 0.1 per cent to $7.8 billion from April’s results.

In the non-residential sector, gains in the commercial and institutional sectors outweighed losses in the industrial component, which declined 6.1 per cent. Commercial permit values increased by 15.6 per cent in May, driven by a significant increase in British Columbia.

British Columbia was also a key factor behind the growth seen in the institutional component, which rose 4.3 per cent in May. That province reported an $82 million permit for a hospital in Fort St. James. New Brunswick also saw notable gains due to permits for a police station and a school in Moncton. Conversely, gains were largely countered by decreases in Quebec (-20.2 per cent) and Ontario (-8.1 per cent).

On the residential side, increases in Ontario and British Columbia were offset by losses in seven other provinces. Construction intentions in the multi-family component decreased 5.9 per cent in May, with StatCan explaining that Quebec returned to more normal levels. Conversely, says the organization, British Columbia saw a 10.1 per cent increase in part due to a $112 million permit for a condo building in Surrey.

Bucking the drop in the multi-family segment, single-family homes have continued their comeback since the COVID-19 pandemic downturn and longer-term decline, increasing seven per cent in total value nationally this month.

Overall in the combined residential sector, the number of new units created decreased 3.4 per cent compared with April.