Building permits on the rise in August

All components aside from the commercial intentions post gains to push permit values to $12.5 billion for the month of August. 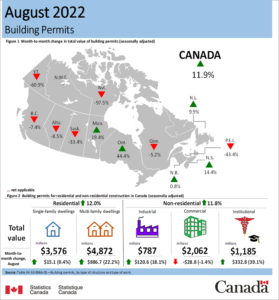 Double-digit gains in both the residential and non-residential sectors paced the total value of building permits in Canada to to $12.5 billion, an 11.9 per cent jump, in August.

The value of building permits in the multi-family component sharply increased by 22.2 per cent, largely due to a massive 85 per cent gain in Ontario. A $480 million permit for a luxury skyscraper in Toronto along with several other permits for apartments resulted in the largest recorded monthly value for the province.

Overall, residential permits increased 12 per cent in August, to $8.4 billion nationally. Construction intentions in the single-family-homes component edged up 0.4 per cent.

Ontario was also in the driver’s seat in the non-residential sector as permits for a new school in Hamilton and a new building for George Brown College in Toronto sent institutional permit values skyward. The 224 per cent increase in Ontario’s institutional segment resulted in a national jump of slightly more than 39 per cent for the segment. Those figures helped pace the overall non-residential sector to an 11.8 per cent increase as the sector hit $4 billion for the month.

The value of building permits in the industrial component rebounded with an increase of 18.1 per cent in August, helped by three permits over $5 million in Saskatchewan and a notable increase in Nova Scotia that resulted from a variety of smaller permits.

The one red arrow on the chart was posted in the commercial component, which decreased 1.4 per cent, largely due to Alberta and Saskatchewan. Conversely, Manitoba saw notable growth in August due to a $50 million permit for an office building in Winnipeg.