Significant drop in non-residential sector building permits leads to a 1.5-per cent decline in overall values across Canada. 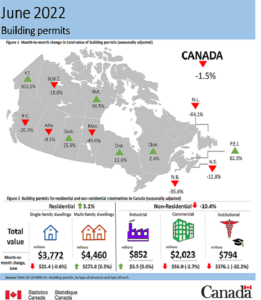 Statistics Canada reports that the national total value of building permits declined 1.5 per cent in June to $11.9 billion. The fall was mainly attributed to the non-residential sector, which dropped 10.4 per cent to $3.7 billion a month after posting its second-highest monthly value on record.

Commercial permit values decreased 2.7 per cent. The decline was attributed to values dropping in eight provinces, which were enough to surpass a notable increase in Ontario, where a permit for a large office building in the city of Toronto paced the province to a jump of 37.5 per cent.

Construction intentions in the institutional component fell 32.2 per cent, largely due to the strong growth that was seen in May as a result of a large hospital permit being issued in British Columbia that month.

A bright spot in the June figures came from the industrial segment, where permit values rose 0.6 per cent. A new power plant in Moose Jaw, Sask., saw that province’s figures shoot up by a remarkable 206 per cent, which helped bring the national figure north of level.

In the residential sector, permits increased 3.1 per cent in June, to $8.2 billion nationally. The multi-family segment increased 6.5 per cent with Ontario leading the way with its rise of 24.8 per cent, thanks to several apartment buildings being built in Mississauga. Overall, 15 out of the 20 highest value permits submitted across all sectors were for apartment or condo buildings.

The single-family home component declined 0.6 per cent due to large decreases in Manitoba and Newfoundland and Labrador that could not be offset by small gains in Ontario.

The non-residential sector saw a decrease of roughly five per cent in Q2, following a strong first quarter. A drop of more than 20 per cent in the institutional component dragged the sector lower as the quarter could not match the two large hospital permits that were issued in Q1. Commercial permits declined less than one per cent, and industrial permits posted gains of 11.4 per cent.