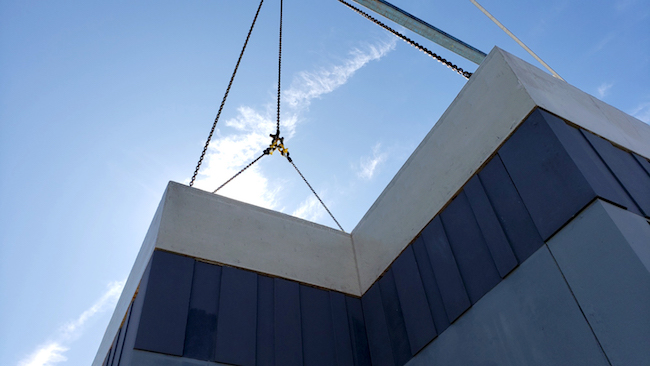 The company’s building panels being hoisted into place on a job site. PHOTO: Nexii

The building materials firm disclosed Jan. 26 it completed its fourth investment round last fall. The latest series brings the total Nexii has raised to $66 million and values the company at $620 million.

Along with using the cash to push up the opening of its new production facility in Squamish, the company said it will expand its manufacturing partner program and continue its innovation and development efforts into sustainable building materials.

“The construction sector has a staggering effect on the environment and is just at the brink of a new revolution in green technology,” Stephen Sidwell, Nexii’s CEO, said in a release. “Not only must we consider the construction or retrofitting of a building, but also the environmental costs of ongoing maintenance. Our material technology and building systems are a huge step forward in reducing climate pollution and we are motivated by the opportunity to be a driving force in the green economy.”

The company has been relatively tight-lipped about the specifics of its building materials, but bills its products as significantly more sustainable than those in traditional structures. A new Starbucks cafe Nexii built last month, for instance, was designed to reduce carbon emissions by roughly 30 per cent, compared to a convention store. Nexiite, the proprietary material in the West Coast firm’s modular building panels is “more thermally efficient and less carbon-intensive than concrete,” the company says.

Nexii started construction on its 90,000 sq. ft. facility in Squamish a year ago, after initially piloting its technology at a 20,000 sq. ft. production plant in Moose Jaw. Sask.

In addition to the funding announcement, Nexii announced two new additions to its board. William McNabb, the former chairman and CEO of Vanguard, as well as Ronald Sugar, chairman of Uber, have joined the company’s board of directors.