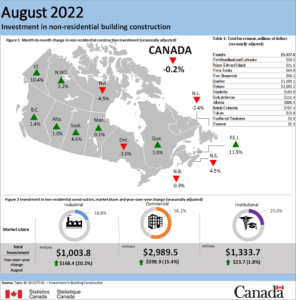 Multiple new apartment projects spanning across Vancouver helped contribute to the growth in the residential sector, where the single-family home segment remained on a relatively stable pace, rising 0.6 per cent to $8.6 billion. Multi-unit construction was up by a similar percentage, rising to $7.2 billion, thanks to those significant gains in British Columbia.

The non-residential sector slipped slightly as a 1.4 per cent decline in the institutional component ($1.3 billion) eclipsed the 0.9 per cent advance in the industrial component ($1 billion in August, a ninth consecutive monthly increase) and the slim 0.1 per cent gain in commercial investment, which reported in at $3 billion. Alberta led the commercial gains as it continued to show significant growth over the past 12 months, up 20.2 per cent year over year in August.

Most of the institutional segment’s weakness came from Ontario as investment decreased for the second consecutive month in this component. Conversely, Prince Edward Island saw an 88.8 per cent increase for institutional buildings with the construction of a new elementary school in Charlottetown contributing to most of the gains.