Both residential and non-residential sectors register significant annual jumps in the cost to build. 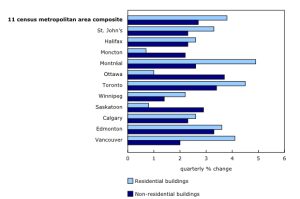 Construction costs were up in the fourth quarter of 2021. The residential building sector experienced an increase of 3.8 per cent, while the non-residential segment saw costs rise 2.7 per cent, a slight deceleration from the previous quarter.

Of the 11 census metropolitan areas (CMAs) included in the Statistics Canada survey, costs to construct residential buildings increased the most in Montreal, followed by Toronto and Vancouver.

Non-residential building construction costs rose the most in Ottawa, Toronto, and Edmonton. However, for both Ottawa and Toronto, the quarterly growth decelerated compared with the previous quarter.

While growth in non-residential building construction prices across some of the CMAs surveyed slowed in the fourth quarter, Saskatoon recorded its highest quarterly price growth of the year. The cost of building bus depots with maintenance and repair facilities, as well as factories, increased the most in this CMA.

Wood, plastics and composites continued to be the largest contributor to the price increase in residential building construction.

Increases in the costs to construct non-residential buildings was mostly driven by a rise in prices for metal fabrication products and concrete elements, including steel reinforcement. Contractors mainly attributed the higher costs to rising labour costs resulting from skilled labour shortages and rises in the price of steel products, which was impacted by supply constraints.

Building construction costs for residential construction in the 11-city composite rose 21.7 per cent year over year in the fourth quarter, surpassing the previous high registered in the third quarter. The largest increases were in Calgary, Toronto, Edmonton, and Ottawa.