Lengthening the line would add hundreds of millions to the construction contract. The current design is expected to cost $1.4 billion 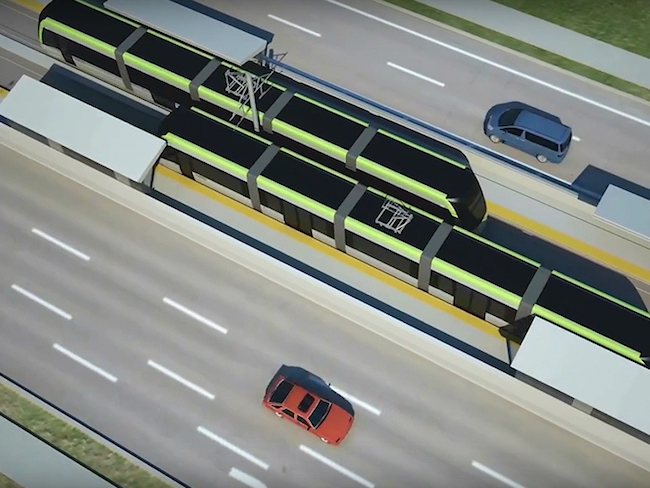 A rendering of the planned LRT. The province is currently weighing proposals from a shortlist of construction teams. PHOTO: Infrastructure Ontario

BRAMPTON, Ont.—The recently turned over city council in one of Toronto’s largest suburbs has passed a motion to revisit a 2015 decision that stopped a yet-to-be-built light rail transit line from entering the city’s downtown.

The freshly-elected Brampton, Ont. council, which is made up of six returning members and four who are new to their posts, voted unanimously to reassess the previous decision that would have halted the Hurontario LRT project at Steeles Avenue, well short of Brampton’s historic downtown. Newly-elected Mayor Patrick Brown, who won the job following an abrupt end to his tenure as leader of the provincial Progressive Conservative Party early this year, also backed the motion.

The project is being spearheaded by Infrastructure Ontario and provincial transit agency Metrolinx. It’s currently at the request for proposals stage. Under the initial timeline, the province said it would announce which of three shortlisted construction teams would build the project this year.

After the 2015 Brampton decision — a move that was harshly criticized due to the provincial funding attached to the project — planners moved ahead with a 20-kilometre route that ran mainly through Mississauga. The early cost estimate sat at $1.4 billion for 22 stops from the Port Credit GO Station to Brampton’s Gateway Terminal at Steeles Avenue. Earlier plans included four more northern stops that would have extended the line into downtown Brampton, ultimately linking up with the Brampton GO Station.

The most recent council decision appears to have put that possibility back on the table, though very late in the tendering process. Along with the lengthier route and extra stops, the Brampton City Council motion called for further study into an option to bury the final leg of the LRT. The underground tunnel would carry light rail vehicles approximately two kilometres into downtown Brampton, as well as greatly expand the scope of the project.

Early construction work has already begun on the 20-kilometre plan for the light rail line, with activities expected to ramp up following the contract award.