The Tunnel Boring Machine for the Scarborough Subway Extension is on its way across the ocean. 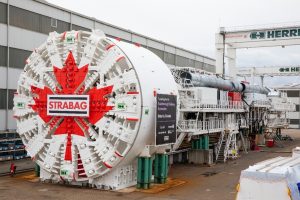 The tunnel boring machine for the Scarborough Subway Extension is on its way across the Atlantic Ocean. (Photo courtesy of Strabag)

The Tunnel Boring Machine (TBM) for the Scarborough Subway Extension is on its way across the Atlantic Ocean. Since being pictured during factory testing at the Herreknecht facility in Germany in September, the TBM was dismantled and packaged into shipping containers for its voyage.

Metrolinx, which is chronicling the TBM’s journey, reports that those containers are now on a cargo ship called, appropriately for the big job, Jumbo Vision, and will take roughly two weeks to cross the ocean, head through the St. Lawrence Seaway, and onto Lake Ontario. The containers are scheduled to arrive in the Port of Oshawa in mid-December.

Transit fans can check the TBM naming contest page where they can follow the project and even help with the naming of the machine. A shortlist of entries will be posted in the coming days that can be voted on by the community. The winning name will be announced in the new year when the tunnel boring machine arrives at the launch shaft site.

Before it begins its work deep below the surface of Toronto, the tunnel boring machine for the Scarborough Subway Extension will have travelled more than 6,300 kilometres from Germany.