The railway would link Alberta with the deep water port in Anchorage, Alaska. PHOTO: Getty Images

A proposed railway project that would provide Alaska with a direct rail link to the rest of the continent, took a step forward late late month with the issuing of a presidential permit.

The permit will allow the planned 2,570 kilometre (1,600 mile) freight line to cross the Canada-U.S. border after traversing Yukon, the southeast tip of Northwest Territories and northern Alberta.

Sean McCoshen, the founder and chairman of Alaska-Alberta Railway Corp. (A2A Rail), said the milestone will “greatly assist” in getting the US$17 billion (CAD$22.5 billion) project built.

“This is a world-class infrastructure project that will generate thousands of jobs for American and Canadian workers, provide a new, more efficient route for trans-Pacific shipping and link Alaska to North American transportation networks,” he said in a release. 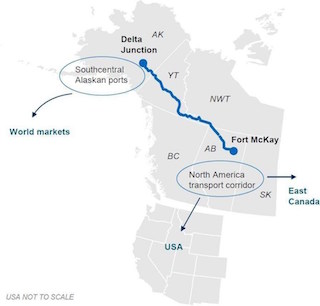 The planned line would run between Fort McMurray, Alta. and Delta Junction, Alaska, where it would link up with the existing Alaska Railway. The connection to the deep water port in Anchorage would provide a new outlet for bulk cargo, such as grain, oil and other resources, A2A Rail says.

Though the company said it anticipates starting “soft” construction this year and plans to have the railway built by 2025, a long list of obstacles remain.

The presidential permit allows the line to cross the Yukon-Alaska frontier, but environmental permits, as well as agreements with Indigenous groups along the route will be required. A2A Rail must also secure financing and carry out the detailed engineering work for the railway before the project moves into construction. The developer said it will now “intensify” these efforts.

In July, A2A Rail said it had hired engineering firm HDR to begin surveying the planned route through northern Alberta.