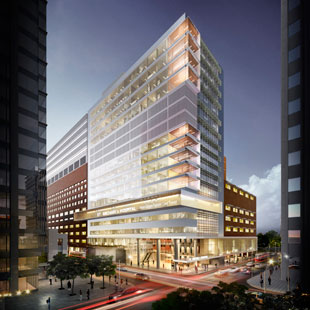 Rendering of the new St. Michael's Hospital tower in Toronto

The $301-million contract includes the construction of a new 17-storey patient care tower at the corner of Queen and Victoria Streets, the renovation of approximately 150,000-sq-ft of existing space, and replacing the 100-year-old Shuter Wing with a new three-storey structure on the corner of Bond and Shuter streets.

The new Peter Gilgan Patient Care Tower wing has been specifically designed to care for critically ill patients. The renovation portion of the project will provide a larger, more modern space, equipped to manage the hospital’s current patient care volumes.

The new space will include:

At the peak of construction there will be approximately 400 workers on site. Bondfield Construction estimates that approximately 95 per cent of the labour for the St. Michael’s Hospital redevelopment project will come from the Greater Toronto area. The contract guarantees a fixed price and a fixed project delivery date. The contract will be paid out when substantial completion is acheived.

Bondfield Construction is part of the St. Michael’s Partnership, which includes architects NORR Ltd. with Farrow Partnership, and Rocklyn Capital Inc. The consortium was one of three companies shortlisted for the construction and renovation project in August, 2013.