Western Canada’s largest convention centre on track to welcome the world in 2024. 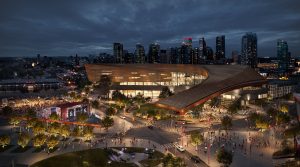 Visitors to this summer’s Calgary Stampede won’t be able to ignore the progress that’s happening with BMO Centre’s expansion. The structure has begun to take its dramatic shape, with one third of the project’s 9,000 metric tonnes of steel already rising high above the midway.

On schedule and on budget for its opening in June 2024, the $500 million BMO Centre expansion is anticipated to be a catalyst for Calgary’s Culture + Entertainment District, creating a world-class venue to attract visitors and attention from around the world.

“The sheer scale of the building and its dramatic addition will be clear to guests the minute they set foot onto Stampede Park,”said Joel Cowley, chief executive officer of the Calgary Stampede. “The expanded BMO Centre will showcase both the bright future of the Stampede as well as the welcoming western hospitality that sets the Stampede apart from other convention venues.”

Featuring over 1 million square feet of space in the heart of Calgary’s emerging Culture + Entertainment District, when the expansion is complete the BMO Centre will be Western Canada’s largest convention centre.

Kate Thompson, president and CEO of Calgary Municipal Land Corporation (CMLC), is pleased with how the project is progressing.

“We’re thrilled to see this big, important new landmark take shape. This is an extremely complex project, and we’ve worked tirelessly alongside our partners at the Calgary Stampede to deliver a world-class facility that’s right for Calgary, while carefully balancing the coordination of hundreds of events that take place on Stampede Park every year, and in close proximity to other major construction projects, like the 17 Ave SE Extension and Victoria Park/Stampede Station Rebuild,” said Thompson. “It is no doubt one of the one of the most active and robust construction areas in Calgary right now.”

The BMO Centre expansion was designed by an award-winning team of architects from Stantec, Populous and S2 Architecture.

PCL is leading construction on the project, which is now fully construction tendered. Currently, over 100 crew members are on site every day, progressing with steel erection and brick veneer paneling, which is on track to be complete by end-of-year.

Funded in partnership by all three levels of government, the BMO Centre expansion is one of over $600M in city-building projects underway in the district, modernizing Stampede Park. When complete, the massive BMO Centre expansion will be taller than both the Saddledome and GMC Stadium. A sprawling plaza – twice the size of Olympic Plaza – and grand staircase will welcome guests to the building from the south, creating even more opportunities for people to gather and celebrate.

Construction on the BMO Centre expansion, as well as construction on the neighbouring 17 Ave SE Extension and Victoria Park/Stampede LRT Station Rebuild project, will be paused during this year’s Calgary Stampede, but is on schedule to be ready in 2024.