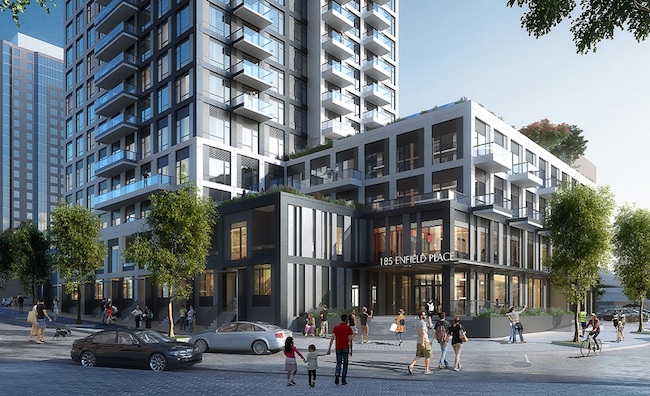 A rendering of the 185 Enfield Place Project in Mississauga. The 35-storey tower includes a four-storey podium. PHOTO: GWL Realty Advisors

Bird Construction Inc. has added approximately $164 million to its backlog with contracts to build new developments in Mississauga, Ont. and Edmonton.

The contractor announced the two new projects May 20, saying it’s scheduled to start work on both in the second quarter of this year.

The 185 Enfield Place Project in the Toronto suburbs is the larger of the two jobs, with Bird’s construction management services contract worth $107 million. The building is a thirty-five storey, 366-unit tower being developed by GWL Realty Advisors at Hurontario Street and Burnhamthorpe Road. It’s designed to LEED Gold standards. Earlier this year, GWL said occupancy is scheduled for 2023.

Looking west, the firm’s other new project is a mixed-use complex known as the Louvre. Bird has signed a stipulated sum contract with Procura Real Estate Services Ltd. worth $57 million to construct the new mid-rise building. Located within the company’s Century Park Project, the seven-storey development is both concrete and wood framed — respectively three and four storeys — plus two levels of parking. Bird said the development will have 358 residential units and more than 800 square metres of commercial space. It’s slated for completion in 2022.