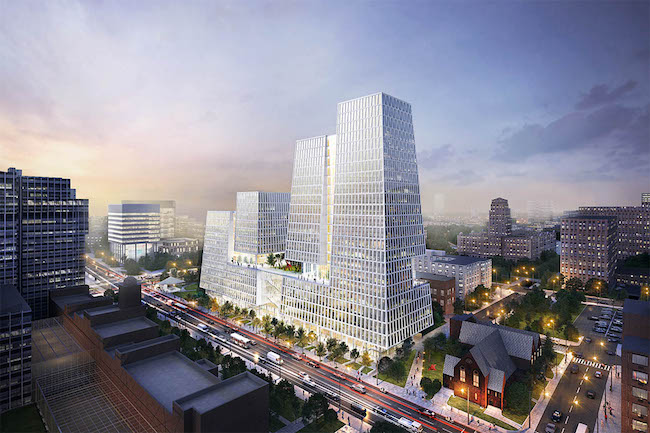 A rendering of the new centre, located on the northeast corner of College Street and Queen’s Park Crescent in downtown Toronto. PHOTO: University of Toronto / Weiss/Manfredi

TORONTO—One of Canada’s richest families is giving $100 million to the University of Toronto — a donation the school says is the largest in its history.

The university said the gift from Heather Reisman and Gerald Schwartz will help build a new innovation complex that will include a new institute to explore artificial intelligence and its related societal and ethical implications.

“We’re immensely proud and excited to be part of an initiative that will further spark innovation, anchor talent and ideas in Canada, and illuminate the importance of socially responsible technology,” the couple said in a statement.

The new complex, named the Schwartz Reisman Innovation Centre, will be housed on the eastern edge of the school’s downtown campus on the northeast corner of College Street and Queen’s Park Crescent. It will include 750,000 sq. ft. of floor space in two towers, providing space to smaller Canadian companies in addition to the school’s researchers.

Construction on the 12- and 20-storey towers will take place in two phases, starting with the smaller building.

University President Meric Gertler said the donation “will enable a deeper examination of how technology shapes our daily lives.”

Reisman is the CEO of Indigo, one the country’s major book stores, while Schwartz is the CEO of Onex Corporation, a private equity firm.

Geoffrey Hinton, an artificial intelligence pioneer and a retired professor from the university, said the donation will be a boon for the burgeoning field.

“It will help consolidate Toronto’s leading position in the AI world,” Hinton said in a statement. “It will also bring together scholars from an array of disciplines to study the implications of AI in today’s world.”

The university said it plans to begin construction on the first phase of the Schwartz Reisman Innovation Centre this fall.

One tower will house the new Schwartz Reisman Institute for Technology and Society and the Vector Institute for Artificial Intelligence, a non profit organization that focuses on machine learning, the school said. The second tower will be home to laboratories for researchers in regenerative medicine, genetics and precision medicine.