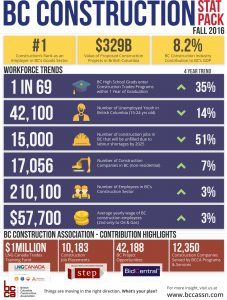 The BC Construction Association (BCCA) is reporting better than expected results for BC’s skilled workforce, in key figures released today for the province’s industrial, commercial, and institutional construction sector.

One of the biggest gains comes in the ratio of BC high school graduates entering construction trades training programs within one year of graduation. When the BCCA first began calculating this number in 2013 it estimated that 1/93 students went from Grade 12 into trades training. In 2016 that number has improved by 35 per cent to 1/69.

“Our youth are getting the message that the trades can be a very rewarding and lucrative career path,” observes Manley McLachlan, BCCA president. “Even so, we would need 1/10 high school graduates to enter the trades in order to have enough skilled journey people for the jobs that are coming.”

“It’s very important to understand that the main reason for the predicted skilled worker shortage is retirements,” cautions McLachlan. “If liquefied natural gas projects go ahead, the gap gets even bigger.  Do not make the mistake of disregarding the worker shortage because of lack of progress on the LNG side. The workforce pressure is on regardless.”

Two thirds of BCs construction workforce is over the age of 45. Construction is the largest employer in BCs Goods Sector, with a total workforce of 210,000 in 2016.

“These trends are all positive, but it’s important to recognize that 11.1 per cent youth unemployment means more than 42,000 young people would like to be employed but can’t find jobs,” says Chris Atchison, provincial manager of the Skilled Trades Employment Program (STEP). “When you compare that to the skills gap in our sector, the solution seems clear. But the problem is still a long way from being solved.”

Construction pays an average year wage of $57,715, an increase of 3 per cent and second only to the average yearly wage in the oil and gas sector.

At 8.2 per cent of BC’s GDP and with an estimated $329 billion in proposed projects, trends in the construction workforce have a big impact on the provincial economy.

BC construction industry hiring workers back from Alberta
B.C. Construction Association heading back to Ireland for recruits