Battle North Gold Corp. has approved construction on a gold mining project in northwestern Ontario, clearing the way for major work to begin on-site this year. 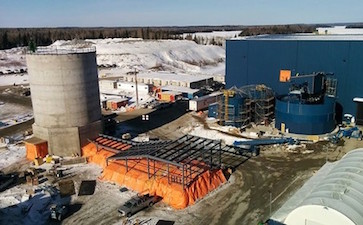 An overview of the existing mine infrastructure. New work will focus mainly on upgrades. PHOTO: Battle North Gold Corp.

“Construction on critical path items has commenced at the Bateman Gold Project and we are excited that the board has approved the full construction of the project, with the potential to be pouring first gold by the end of the year,” George Ogilvie, the company’s president and CEO, said in a release.

The Bateman mine is located in the well-know Red Lake mining district about 250 kilometres northeast of Winnipeg, across the Ontario border. It is a successor to Rubicon’s Phoenix gold project that went into production in 2015, but failed to deliver on expectations.

The revived project will use some of the existing infrastructure that has spent several years in care and maintenance, including the mill facility with a 1,250 tonne per day capacity. New work includes the construction of an enhanced wastewater treatment system, upgrades to an existing camp and work on underground infrastructure reaching several hundred metres below ground. Upgrade work on the site’s tailings management facility is also planned.

Battle North said it has assembled an in-house engineering and construction management team that will oversee work on the project. It plans to process the first ore by the end of 2021 and reach commercial production at the mine by the end of 2022.