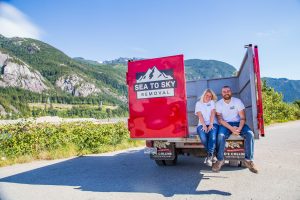 S2SR operates throughout Whistler and the province’s Lower Mainland.

Sea to Sky Removal (S2SR), based in Squamish, B.C., has been awarded Best Concept at the 15th annual Small Business BC Awards.

Run by husband-and-wife team Chris Arkell and Cinci Csere, S2SR provide tutorials to crews who might typically throw all materials in a single trash bin, such as plastic, wood, cardboard, carpet and stone.

S2SR crews hand-sort and hand-load all materials – a process called “live-loading.” Approximately 300 pounds of recyclables can be diverted for each recycling service, reports S2SR.

Photo documentation and diversion percentage reports for Built Green and LEED projects allow contractors to know where materials end up.

S2SR is a member of the Recycling Council of British Columbia, so the company’s clients can amass green points on builds. S2SR donates reusable items to non-profits like Habitat for Humanity.

“It’s crazy to see what construction companies throw away,” said Arkell. “We want to create more awareness and conversation around construction industry waste, with the ultimate goal of diverting recyclable materials from landfills. When it comes to sustainability, the industry needs a nudge in the right direction.”

Only 75 per cent of the construction industry’s waste – 1.5 million tonnes annually throughout the Lower Mainland – is recycled, according to S2SR. More than half of construction materials that end up in landfills could be reused or recycled.