September 9, 2020   By The Canadian Press
Construction 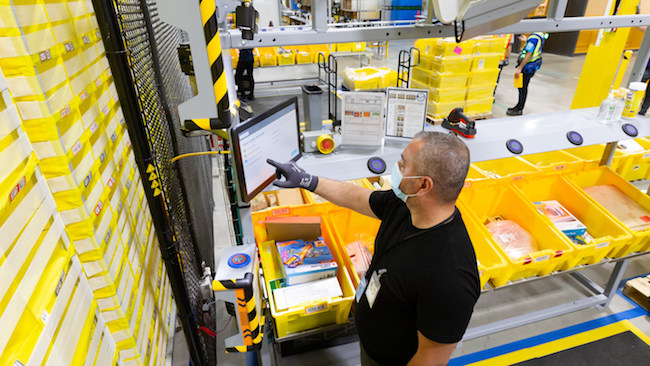 The retailer will have 16 distribution centres in Canada, 10 of which will be in Ontario. PHOTO: Amazon Canada

The online retailer said Wednesday a new 79,400 square-metre warehouse adjacent to Hamilton’s airport will have more than 1,500 employees who will pack and ship small items such as books, electronics and toys.

A new 92,900 square-metre location east of Toronto in Ajax, Ont., will have more than 1,000 employees who will pack and ship large items such as sports equipment, patio furniture, pet food and other household goods.

“We’ve had great success with the talented workforce in Ontario, and we look forward to creating an additional 2,500 full-time jobs with competitive pay and benefits starting on day one,” Sumegha Kumar, Amazon’s director of Canadian customer fulfilment operations, said in a news release.

The two new operations are expected to open in 2021.

“This is the beginning of a strong partnership with Amazon Canada, and I look forward to our continued collaboration in the future,” Hamilton Mayor Fred Eisenberger said.

Ajax MPP Rod Phillips said the commitment is good for the Durham Region.

“The 1,000 new, full-time jobs Amazon has committed to are coming at a crucial time. It is a good example of the kind of investment we need in Ontario as the economy recovers from COVID-19,” he stated.

The new distribution centres bring Amazon’s total to 10 in Ontario and 16 in Canada, including one in Leduc Country, south of Edmonton.

Amazon also confirmed plans for five new delivery stations in Ontario including Kitchener, Stoney Creek, Vaughan and two in Toronto in the Etobicoke and Scarborough neighbourhoods.

The announcement comes nearly two years after the company decided to spread its second headquarters over two U.S. cities and rejected a joint bid from Toronto and surrounding municipalities that were among the final contenders.

The Competition Bureau last months launched a probe into Amazon’s conduct to determine whether the online retailer is harming competition.

Specifically, it is reviewing whether Amazon policies impact sellers’ willingness to offer their products at a lower price on other retail channels, such as their own websites or rival online marketplaces.

The bureau is also looking into any efforts by Amazon to tilt consumers toward its own products over those offered by competing vendors, as well as any disadvantage that sellers incur by opting out of Amazon’s shipping, customer relations and advertising services.