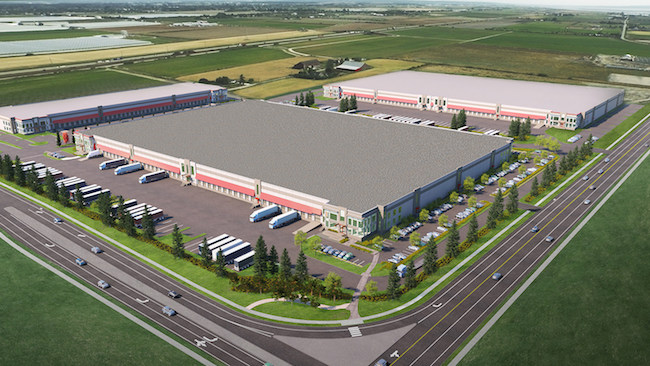 The 450,000 sq. ft. warehouse is expected to be complete this year. Amazon said it will open the new fulfillment site in 2019. PHOTO: GWL Realty Advisors

The online retail giant will locate the warehouse at a Lower Mainland industrial park currently being developed by GWL Realty Advisors, acting on behalf of project owner Healthcare of Ontario Pension Plan (HOOPP). Known as Delta iPort, the industrial development adjacent to the Port of Vancouver will eventually cover 57 acres, with Amazon occupying the first phase of the site.

Wales McLelland is serving as the general contractor for the project and has already reached substantial completion on the shell of the 450,000 sq. ft facility, according to GWL.

The West Coast expansion follows two similar Amazon announcements in Ontario this July. The company announced plans to built a new one million sq. ft. facility outside Ottawa early in the month, as well as another in Caledon, Ont. about two weeks later.

Dedicated to shipping merchandise, new B.C. warehouse facility is expected to create 700 jobs. It will become Amazon’s third fulfillment centre in the province and its 10th in Canada.

Construction crews are expected to complete the site this year and Amazon says it will open the facility in 2019.