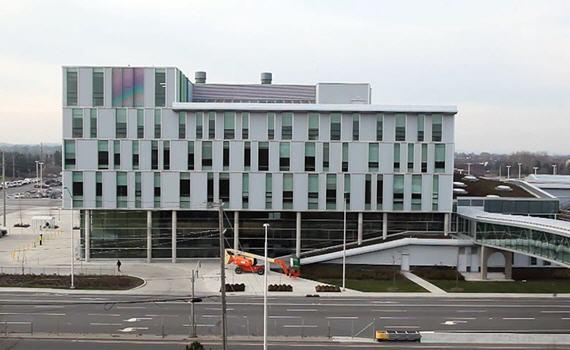 An Algonquin College building is one of eight Canadian structures—and the only one from Ontario—that received a 2013 Canadian Green Building Award.

Opened in September 2011, the Algonquin Centre for Construction Excellence, a LEED Platinum Level building, is described as a “one-of-a-kind living laboratory” on the college’s website.

Featuring interconnected indoor and outdoor spaces, a green roof that collects rainwater, a biofilter wall and skylights for natural light, the building has been acclaimed for its sustainable design and educational elements.

Sustainable Architecture & Building Magazine (SABMag) reports the jury for the Green Building awards commented that the college was particularly strong in its combination of energy performance and architectural quality.

The project incorporates several well-considered green strategies including green roof and solar shading, the jury said, and the design team took full advantage of the program by making the building itself a powerful educational tool. www3.algonquincollege.com/acce/