With job nearly complete, Graham is out as builder of Grande Prairie hospital

Already years into construction, the province and Graham have sparred over the project's timeline and budget. Alberta claims to have terminated the deal with the contractor; Graham says it quit 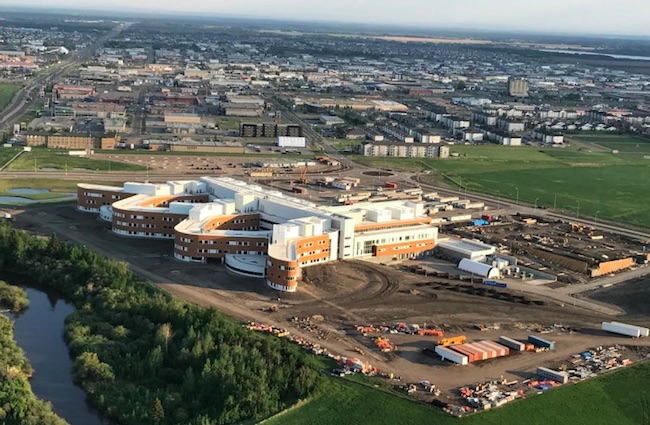 The exterior of the hospital is done and the interior is about 75 per cent complete. PHOTO: Alberta Health Services

EDMONTON—A major spat over a long-delayed, over budget hospital project in Grande Prairie, Alta. has prompted the provincial government and contractor Graham Construction to go their separate ways.

Alberta Infrastructure Minister Sandra Jansen said Sept. 10. the province is looking for a new construction manager to take over the build after it terminated its contract with Graham.

The government had issued an ultimatum last month, demanding the Calgary-based contractor put together a plan to get the project back on course, or else. It said the company submitted a plan, but it did “not provide the certainty that was needed.”

Graham tells a very different story. In a statement released Monday, the company said it issued a notice to terminate the contract with the government weeks ago. The company cited Alberta’s failure to meet its contractual obligations in a legal notice issued to the province Aug. 17. Prior to handing in the notice, Graham had defended its record on the project, accusing the government of poor planning and continual scope changes that led to added costs and delays.

Work on the hospital is at a standstill until further notice. The facility’s exterior is already done, while the interior is about 75 per cent finished.

Last month, Graham argued the project’s $763 million budget was inadequate to complete the work. It had requested $120 million more, including a $35 million contingency fund, blaming hundreds of change orders, as well as dozens of design and scope changes. The province, meanwhile, claimed the contractor’s requests for further funding and more time were unjustifiable.

“This was not a decision that was made easily. I have been clear that this project is a government priority and that’s why we are taking action to construct this hospital as quickly as possible,” Jansen said, adding that ending the deal with Graham will provide greater clarity when work resumes.

Along with announcing the 11th-hour termination of the contract with Graham, the province said it aims to hire a new construction manager for the project by the end of October. It issued a request for proposal Monday and hopes to have crews back on-site by the beginning of November.

Graham said it will be seeking damages from the province.

5 Comments » for With job nearly complete, Graham is out as builder of Grande Prairie hospital