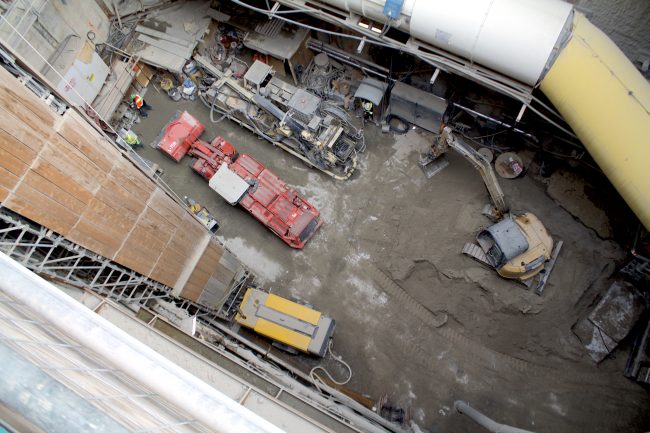 Construction on an underground Eglinton Crosstown station in Toronto. Aecon is part of the consortium building the project

TORONTO—Aecon Group Inc. reported results from a “strong” second quarter July 26 with year-over-year increases in both revenue and earnings.

The Toronto-based contractor said it booked revenues of $867 million for Q2 2019, up 15 per cent from the same quarter a year ago. Diluted earnings per share of 31 cents compare to 13 cents per share in the second quarter of 2018. They also beat analyst expectations of 22 cents per share, according to financial markets data firm Refinitiv.

“Aecon’s second quarter results illustrate the strength of our market position and sustained progress made to deliver growth, operational excellence, and consistent performance through scale, end-market diversity, and financial strength,” Jean-Louis Servranckx, the company’s president and CEO, said in a release. “Aecon’s current strong backlog is diversified across multiple sectors, geographies and duration, and we expect this to drive future growth and profitability in 2019 and into 2020.”

Servranckx added the contractor sees a “significant pipeline” of future opportunities as it looks ahead to 2020.

The company’s backlog of work rose marginally to $6.8 billion by the end of June, compared to $6.7 billion in March and $6.4 billion a year earlier. Among the major contract wins during the quarter were financial close on a $640 million contract for a Highway 401 expansion project west of Toronto, in which Aecon holds a 50 per cent stake.

Following quarter end, the company said it landed a $111 million design-build contract to construct a water treatment plant in Comox Valley, B.C. Work on that job will begin in the third quarter.

Aecon shares were up more than seven per cent in late morning trading July 26.

—With a file from The Canadian Press