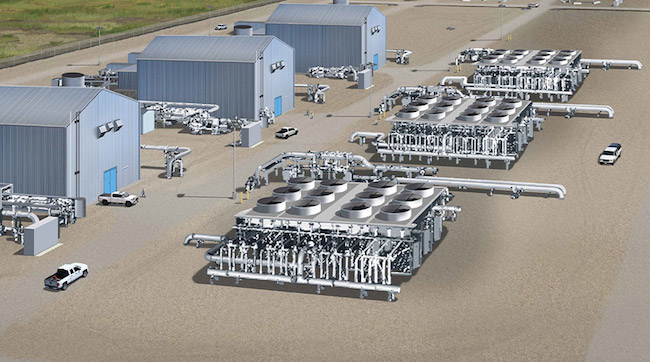 A rendering of the Wilde Lake Compressor Station, one of the facilities along the 670-kilometre pipeline route. PHOTO: Coastal GasLink

VANCOUVER—The company behind the pipeline that will supply natural gas to LNG Canada’s new export facility in northwest British Columbia says it is ready to launch its summer construction program, which will see the first section of pipe buried in the ground next month.

Along with the pipe work, Coastal GasLink says in a statement that construction will begin this summer on a compressor and metering stations that will form anchor points along the 670-kilometre pipeline running from the Dawson Creek area to Kitimat. For these facilities, the company has tapped Aecon Group Inc. as the prime contractor.

“We are pleased to welcome Aecon to our high-quality team of prime contractors that’s been assembled to safely and effectively deliver this world class project,” David Pfeiffer, Coastal GasLink’s president, said in a release. He added that the contractor brings a “wealth of experience” building pipeline facilities.

Work on the main compressor station is slated to begin in July and the company says activity on the entire project will gradually ramp up in the following months.

It expects to reach a peak in September, with a workforce of more than 2,500.

Opposition by the hereditary chiefs of the Wet’suwet’en Nation to construction of the pipeline through their traditional territory set off demonstrations and blockades that shut down large parts of the national economy in February.

When complete, Coastal GasLink, which is controlled by TC Energy Inc., says its pipeline will deliver at least 2.1-billion cubic feet of natural gas everyday to the LNG Canada liquefied natural gas facility being built in Kitimat.

Contempt of court charges were dropped this month against 22 members of the Wet’suwet’en and their supporters who were arrested in northwestern B.C. during protests against the pipeline.

—With files from On-Site Staff