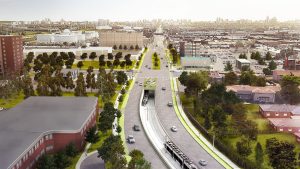 The contract includes $1.2 billion of construction costs. Mosaic’s proposal aims to deliver the LRT by 2023.

Members of the Mosaic Transit Group include:

The consortium, awarded in April, will be responsible to design, build, finance and maintain the 11-kilometre, 18-stop LRT.

Construction is expected to begin in fall 2018. At the peak of the project, Mosaic estimates there will be 600 workers on-site, and 85 per cent of labour will come from the Greater Toronto Area.

The LRT will remain publicly owned, and the Toronto Transit Commission will operate it under a separate agreement with the city.

The project consists of a terminal stop at Humber College, 16 surface stops and an underground interchange station at Keele Street that connects with the Finch West Subway Station on the Toronto-York Spadina Subway Extension.

A maintenance and storage facility will be constructed for the light rail vehicles and other required components, such as track works, signalling, communications, and public realm infrastructure.