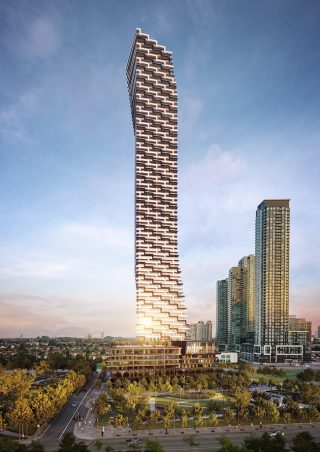 MISSISSAUGA, Ont.—There’s no end in sight for construction crews at a bustling 15-acre development on the western edge of downtown Mississauga.

About four months after work began on a pair of 60-storey towers in the Toronto suburb, the first of eight that will make up the area dubbed “M City,” the developer behind the huge project has revealed plans to reach even higher.

It will be the largest building in Mississauga by some 20 storeys, as well as the tallest anywhere in the country outside Toronto.

The development company, which is controlled by the Rogers family, is working with Urban Capital on the M City project. The eight towers are expected to cost $1.5 billion to build and together will house 4.3 million sq. ft. of space.

Canada’s IBI Group designed the latest tower, which twists slightly and includes a step ladder-like crown that extends up its final few storeys. The residential structure will be comprised of 900 units ranging from 480 sq. ft. to 1,000 sq. ft.

With construction only recently getting underway on M1 and M2, the developers did not reveal when work would begin on the newly-planned building.