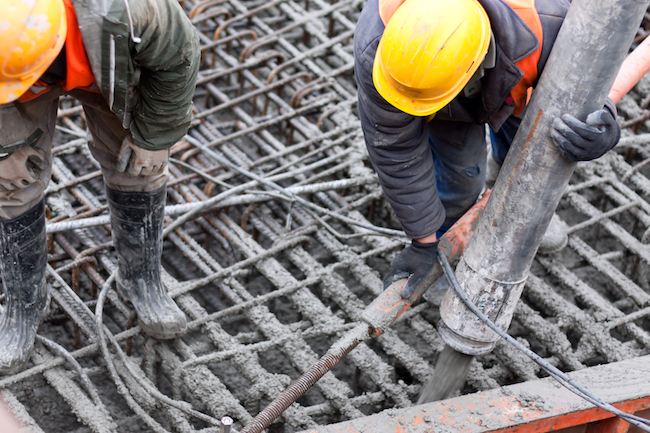 Concrete and cement demand dropped around 30 per cent in March and April, before surging and remaining elevated through the fall. PHOTO: Getty Images

Construction materials suppliers have spent much of 2020 digging out. Uncertainty and job site shutdowns this spring walloped demand, but by early summer, the need for concrete and lumber, among many other products, outstripped supply, leading to shortages, rationing and higher prices.

Suppliers are still catching up, but as a unique 2020 draws to a close, they’re also watching a shrinking project pipeline with growing apprehension.

In a webinar hosted by the Canadian Construction Association last week, representatives from the concrete, forestry and steel industries sat down to discuss some of the steep challenges the year brought, as well as the outlook for the months ahead.

“One of the things we’re concerned about at the moment, is we’re seeing a tail-off and a trending down in new projects,” said Ed Whalen, president and CEO of the Canadian Institute of Steel Construction (CISC). “Certainly, there is some bidding out there, but projects actually going forward have not been to the same degree as we’ve seen in other years.”

Unlike his counterparts on the concrete and lumber side, Whalen noted the steel industry has generally not faced the same issues with shortages. He pointed to storage centres holding a surplus of “bread and butter” materials, as well as rail and port systems seeing less disruption as the main reasons steel producers were able to weather the storm with relatively few problems.

Nevertheless, the longer lead times the steel industry requires has producers calling on governments to get moving on infrastructure funding.

Bart Kanters, the president of Concrete Ontario, or the Ready Mixed Concrete Association of Ontario, shared Whalen’s concerns about fewer projects in the pipeline. This summer however, the opposite scenario has played out, with concrete and cement producers running full out following a 30 per cent drop in production in March and April.

“Once we got into mid-May and then on, [demand] has essentially been 10 or 15 per cent higher than we would normally see,” he said.

Shortages of cement and supplementary cementing materials — such as fly ash and slag — have led to concrete rationing and delays this summer, particularly in Ontario and Quebec. Kanters said producers typically operate on 12 to 24 hours notice, but in the past few months, they have been asking for as long as two weeks notice from contractors working on large pours.

Cement producers expect the cooler weather to help them catch up.

“We probably have another six to eight weeks if normal demand conditions apply where we’re going to be in a tough situation. Then seasonal slowdowns should kick in and cement production will pick up,” Kanters said, adding that shortages of fly ash and slag may prove longer-term.

The lumber industry has faced similar demand jolts in 2020, though not all can be directly tied to the pandemic.

Derek Nighbor, president and CEO of the Forest Products Association of Canada, said it was “absolute chaos” during the first few weeks of the pandemic, with order sheets collapsing and lumber prices falling about 30 per cent. From there, the market turned around in a hurry, driven by an unforeseen boom in renovations and home purchasing.

“We saw that surge then in lumber and we’re still catching up,” Nighbor said in the webinar, noting that COVID is just one of a number of issues the forestry industry has been battling this year, with pests, fires and logistics challenges also causing considerable problems.

Looking ahead, Nighbor said the industry has not “caught up, but is catching up.”

“Now that we’re back up online and operating, all the mills that are able to be operating are operating, so hopefully over time, we’re going to be able to catch up through the last quarter here into 2021,” he said.

Mary Van Buren, the president of the Canadian Construction Association expects the industry will welcome the shoring up of its supply chain as a challenging 2021 comes to an end.

Though the industry was able to adjust on the fly to new health and safety rules this spring, supply chain issues have lingered. The Ontario Construction Secretariat (OCS) has conducted four studies throughout the pandemic on sentiment in the industry, each time showing about two-thirds of contractors impacted by supply chain disruptions. In the latest survey released earlier this month, 64 per cent cited high or medium impacts from supply chain issues, showing no improvement since April.

You can watch the full, hour-long discussion here.