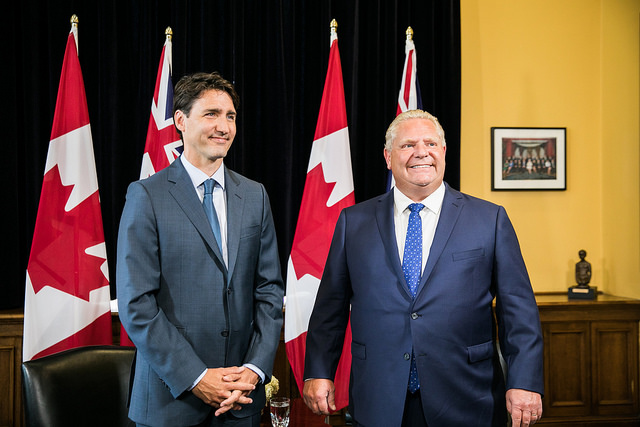 Ford and Trudeau meet earlier this month. The decision could provoke a showdown between the newly-elected Ontario government and Ottawa. PHOTO: Premier of Ontario Photography/Flickr

TORONTO—Ontario’s new Progressive Conservative government expects to spend up to $5 million to compensate companies that bought into the province’s cap-and-trade system, the provincial environment minister said July 25 before moving to repeal the carbon pricing program.

Rod Phillips introduced a bill that, if passed, will lay out the legal framework to wind down cap and trade, as well as the criteria for companies seeking to be reimbursed for costs incurred through the program.

While the program’s 272 participants bought close to $3 billion in allowances, Phillips said only those that purchased more than they used while the program was still active, and were not able to recover those costs from consumers, will be eligible for compensation.

The proposed legislation would also protect the province from any potential litigation over the decision, the government said.

Critics were quick to call the move disruptive for business, saying it will likely be challenged in court despite the immunity built into the bill. But Phillips said he believes it will be well received.

“The feedback I’ve been getting from the business community is quite positive about this government and so I don’t have worries about that. This is a very fair framework around compensation,” he said.

The cap-and-trade system aims to lower greenhouse gas emissions by putting caps on the amount of pollution companies in certain industries can emit. If they exceed those limits, they must buy allowances at quarterly auctions or from other companies that come in under their limits.

Scrapping the system was one of Premier Doug Ford’s key promises during the province’s spring election campaign, and one of the priorities he vowed to address in this month’s rare summer sitting of the legislature. The government said it is part of a plan to reduce gas prices by 10 cents per litre.

The Tory government has already taken steps to unravel the program, including revoking the regulation that lays out its operation. That has led to the cancellation of a number of green initiatives that were funded through cap-and-trade revenues, such as rebates for energy-efficient renovations and a fund for school repairs.

Opposition parties had expressed concerns that the government could be on the hook for billions of dollars to compensate permit holders, and that the Tories have yet to explain how they will make up for the lost revenue.

Others, including the federal environment minister, had also raised the alarm about what they perceived as Ontario’s lack of a plan to tackle climate change.

The New Democrats and the Green party said the bill introduced Wednesday did not assuage their fears, even though it requires the government to set targets for reducing greenhouse gas emissions and to publish a climate change plan. Phillips said the specifics of both would be determined at a later date.

“Ontario needs a real climate plan that puts a price on pollution, puts money in people’s pockets and supports jobs in the clean economy. Instead we are getting a war on the modern world and no indication from the PC government that climate change is on their radar,” Green Leader Mike Schreiner said in a statement.

NDP environment critic Peter Tabuns said taxpayers are likely to end up paying more because of potential legal battles over the bill, as well as the price of a carbon tax the federal government has vowed to impose on provinces that do not have their own carbon pricing systems by next year.

“I guess we’ll see whether or not the $5 million is realistic but I think the bigger question is, for a lot of Ontarians, they’re going to see higher carbon prices in the coming years because the federal government’s program is going to cut in,” he said.

The provincial government said dismantling cap and trade would save each household an average of $260 next year, but acknowledged that would largely be cancelled out by the federal carbon tax, which is set to increase over time.

Ford has said he would join Saskatchewan’s court challenge of the federal government’s ability to impose a carbon price upon the provinces—a legal fight for which his party has budgeted $30 million over four years.

Ontario’s fiscal watchdog said Tuesday it will look into how much the cancellation of cap and trade will end up costing the province.