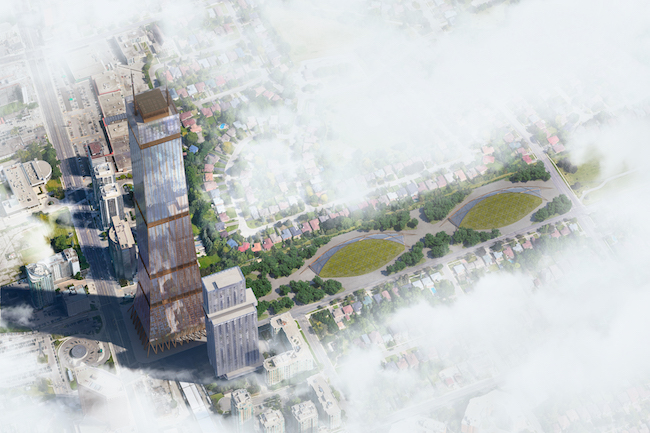 A rendering of the 105-storey hybrid wood tower that makes use of a new composite floor system. PHOTO: Dialog

As the Canadian building industry and industry regulators gain experience with mass timber construction, designers in the fast-growing space are looking higher.

Architects and engineers at design firm Dialog released a prototype this summer of a “supertall” hybrid wood tower that would rise 105 storeys while achieving net zero carbon over its life-cycle.

The Canadian-headquartered firm, with offices in Vancouver, Calgary, Edmonton, Toronto and San Francisco, worked with contractor EllisDon to map out what construction and costing would look like on the mass timber tower, as well as with consulting engineer Rowan Williams Davies & Irwin Inc. (RWDI) on the aerodynamics.

Combining mass timber with concrete and steel, Dialog said the design would reduce embodied carbon in the building by 46 per cent compared to a tower built entirely from the more traditional high-rise materials. The prototype makes use of the company’s patent-pending Hybrid Timber Floor System (HTFS), a pre-fabricated composite floor system that integrates both steel and concrete components into cross-laminated timber panels. 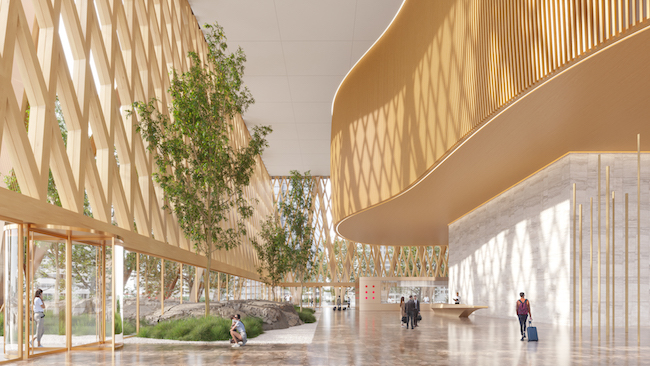 The interior of the prototype tower, which uses mass timber, concrete and steel. PHOTO: Dialog

To reach net zero carbon during operations, the design utilizes solar panels on three of the tower’s facades, a cogeneration plant and an algae bioreactor.

While it may be some time before Canada sees a 105-storey hybrid tower at the top of the Toronto, or Calgary, or Montreal, skyline, the new prototype is part of the growing momentum for both hybrid and wholly mass timber towers.

Recent advances in wood building, the need to tackle emissions in the building industry and upcoming changes to the National Building Code are expected to fuel demand for timber towers coast to coast.