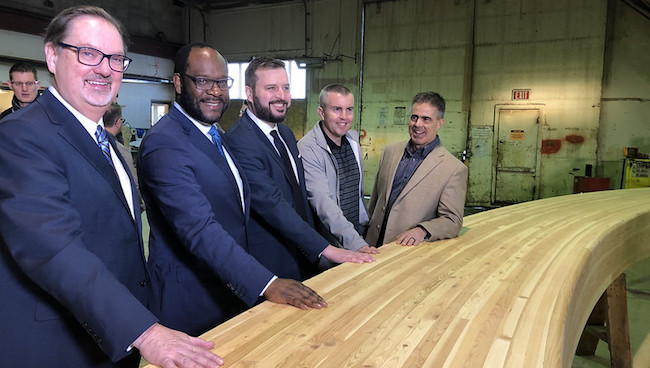 Minister Madu and other officials tour wood systems manufacturer Western Archrib as part of the announcement. PHOTO: Government of Alberta

The province’s Municipal Affairs Minister Kaycee Madu said Jan. 24 the Alberta government will allow for wood construction projects of up to 12 storeys — double its current limit of six.

“Not only will this decision support the forestry industry and land developers, it will provide affordability to homebuyers, bolster employment, and give Alberta a competitive advantage,” Madu said in a release. “We made this change knowing that mass timber products are safe and that these buildings will meet all necessary standards.”

The move comes as construction or planning of an increasing number of taller timber towers gets underway in cities such as Vancouver and Toronto. British Columbia adjusted its building code last year, while it’s widely anticipated similar changes to the national building code will be written in this year. The evolving regulations mirror technological advances in wood building methods and materials.